Blind Betrayal by Nancy Mehl is the third installment of the Defenders of Justice series about US Marshalls in St. Louis, Missouri.

US Marshall Casey Sloane and her partner Doug Howard have a federal witness, Valerie Bennet, in custody. They are taking her to Washington D.C. in order for her to testify against a corrupt member of the government. FBI agent E.J. Queen, a former partner of Casey’s, is going to accompany them. An incident at the headquarters in St. Louis forces them to change plans. They are on the run from a seriously bad guy and his minions. Who do they trust and how will they get their witness safely to the feds? 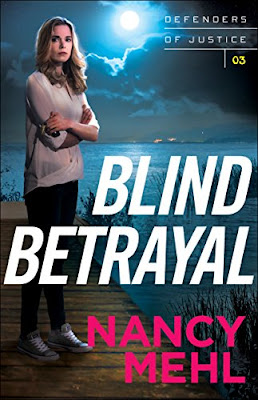 This was one wild ride. Nancy gives us a glimpse of what a US Marshall might have to deal with in a scary scenario. They need to outwit the evil mastermind who is pulling the strings. But how does he know their every move?

E.J. and Casey, who are both Christians, convey the theme that God is to be trusted and relied upon even when circumstances seem unsurmountable. E.J. and Casey have a history, so a touch if romance is included, too.

If you want non-stop adventure, latch on to this book and don’t forget to pick up the whole series. It is so suspenseful, I can hardly wait for Nancy’s next book!

*I received this book from the author in a giveaway contest. I was under no obligation to post a review. All opinions are my own.*

Back cover Blurb:
Deputy U.S. Marshal Casey Sloane has worked at the St. Louis Marshals office for two years and is given a routine assignment to help transport a reporter to D.C. to testify before a grand jury. Valerie, the reporter, was writing a story about an up-and-coming environmentalist who suddenly disappeared and, she later discovered, whose backers purportedly have ties to a terrorist.

When the seemingly ordinary assignment suddenly takes a shocking turn, Casey is forced to put aside her own feelings about the unexpected reappearance of a man from her past as she and two other Marshals take Valerie on the run. And as it becomes dangerously clear Valerie's testimony has even bigger implications than they knew, they'll do whatever it takes to make it out alive.