MORE THAN MEETS THE EYE by Karen Witemeyer, review by Paula Shreckhise

More Than Meets The Eye (Patchwork Family) by Karen Witemeyer is the first in a series of books set in 1894 Texas.

“When her family is threatened, she doesn’t expect falling in love to be their defense” 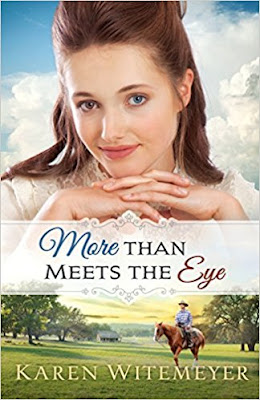 Everybody is hiding secrets: Evangeline Hamilton, with her mismatched eyes is considered a freak. Evie, along with her adopted brothers, Zach and Seth, are hiding their real last names so they can continue as a family. Logan Fowler is hiding his identity as he seeks justice for his mother— or is it revenge? The main characters keep asking themselves: Where do my loyalties lie? As circumstances change, so do those definitions of justice and revenge. Can the love of God and human devotion overcome and unite these very different people?

Karen Witemeyer delivers a delightful story with her signature humor and fiesty heroine and a hero who is trying to do the right thing. She causes the reader to ponder the issues of prejudice and acceptance, forgiveness and reconciliation. And whose justice should we really be seeking?

A satisfying and exciting conclusion to this old west tale will make you glad you ventured into Pecan Gap.

*I received a complimentary copy of this book from Bethany House Publishing. I was under no obligation to post a favorable review. All opinions are my own.*

BACKCOVER BLURB:
Many consider Evangeline Hamilton cursed. Orphaned at a young age and possessing a pair of mismatched eyes--one bright blue, the other dark brown--Eva has fought to find her way in a world that constantly rejects her. Yet the support of even one person can help overcome the world's judgments, and Eva has two--Seth and Zach, two former orphans she now counts as brothers.