MURDER AT THE FLAMINGO by Rachel McMillan, review by Rebecca Maney

"You are only as strong as the moment that finds you braver than you have ever been." 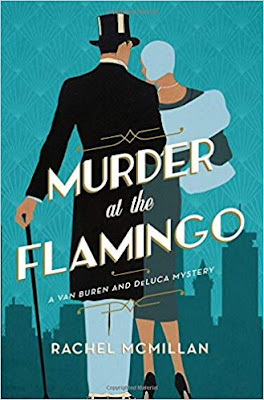 Not many people would consider Hamish DeLuca to be brave; brilliant, introverted, unpredictably anxious maybe, but not brave. Or perhaps he just needed the opportunity. For when Hamish shrugs off an embarrassing debut into his legal career, and travels from Toronto, Canada to the bustling city of Boston, Massachusetts to visit his extravagant cousin Luca, he discovers that courage often needs just the right partner. After all, nothing will test one's heroism like solving a murder and no one fits Hamish quite like the dazzling Regina "Reggie" Van Buren.

Escaping her claustrophobic life as an heiress, while dodging an unwanted suitor, Reggie Van Buren decides that life in Boston is just what she needs. Accepting a secretarial position with the enigmatic new owner of the hottest club in town, she fields the most curious phone calls from Chicago and tries to pretend that everything leading up to the Flamingo's grand opening is above board. Besides, her boss's cousin would never step across any illegal lines; Hamish DeLuca is just as determined as she is to understand Luca's diverse set of business partners. If only a murder had not been thrown into the mix, they could have enjoyed the Flamingo's smashing debut, while making many more of their own memories on the dance floor.

Above all, "Murder at the Flamingo" a story to be savored and enjoyed; written by an author with an uncanny ability to write just the right words, creating a unique pair of charismatic characters who will undoubtedly capture your heart with their perfectly imperfect partnership and keen determination to "breathe" and "hope" towards the future. "Spira. Spera."

“Maybe it was time to land straight in the middle of the adventure…”
Hamish DeLuca has spent most of his life trying to hide the anxiety that appears at the most inopportune times -- including during his first real court case as a new lawyer. Determined to rise above his father’s expectations, Hamish runs away to Boston where his cousin, Luca Valari, is opening a fashionable nightclub in Scollay Square.  When he meets his cousin's “right hand man,” Reggie, Hamish wonders if his dreams for a more normal life might be at hand.

Regina “Reggie” Van Buren, heir to a New Haven fortune, has fled fine china, small talk, and the man her parents expect her to marry. Determined to make a life as the self-sufficient city girl she’s seen in her favorite Jean Arthur and Katharine Hepburn pictures, Reggie runs away to Boston, where she finds an easy secretarial job with the suave Luca Valari. But as she and Hamish work together in Luca’s glittering world, they discover a darker side to the smashing Flamingo nightclub.

When a corpse is discovered at the Flamingo, Reggie and Hamish quickly learn there is a vast chasm between the haves and the have-nots in 1937 Boston—and that there’s an underworld that feeds on them both. As Hamish is forced to choose between his conscience and loyalty to his beloved cousin, the unlikely sleuthing duo work to expose a murder before the darkness destroys everything they’ve worked to build.

* I purchased this book and was under no obligation to review or provide a favorable review.