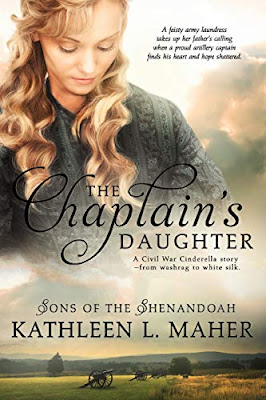 The Chaplain’s Daughter is book two in the series Sons of the Shenandoah by Kathleen L. Maher.

This is a well-written story about two souls caught in the upheaval of the Civil War. Can they trust God to see them through this turbulent time?

Seemingly abandoned in 1862, The Chaplain’s Daughter, Miss Ellen White has to fend for herself. She finds work as a washerwoman at a field hospital in Virginia until she is pressed upon to help with a badly wounded Captain Gideon Sharpe. After his father, Sam, visits, she agrees to travel with them to Sam’s horse farm in order to nurse Gideon during his recovery.

Having sustained injuries that will take a long time to heal, Gideon is brought by his father to the family home. But Gideon wants nothing more than to return to his own home and his twin baby daughters who have lost their mother.
Ms. Maher aptly depicts the battle scenes of the war and the resulting nightmares that Gideon experiences. She also shows the strong faith of Ellen, how it permeates her life and how it affects those around her. The author has captured the flavor of the old South and describes what it was like for a family to be on the Confederate side of the conflict. She lets us see into Ellen’s emotions as she makes her way through difficult times. The hardships that Gideon goes through during battle, losing his wife, being injured and feeling inadequate are eloquently conveyed in this striking novel.

Be sure to read the story about Gideon’s brother Ethan in The Abolitionist’s Daughter.

I like to read about this period in our country’s history and this book is among the best I have read.

*I received a complimentary copy of this ebook from the author. I was not required to give a favorable review. All opinions are my own.*

A minister's daughter abandoned during war must rely on faith to survive. A wounded widower feels God has forsaken him. Will her devout care bring medicine to his soul or rub salt in his wounds?

Ellen White is assigned to attend a debilitated artillery captain after the Battle of Second Manassas. She offers God's strength, but Gideon Sharpe would rather rely on his own. He would prove himself devoted to his motherless infant daughters, the sort of father he never had.

Ellen longs for the security of a home and to feel cherished. Can a jaded and broken man be God's plan to fulfill her fondest hopes?

Kathleen is generously offering a giveaway of one digital copy. If you are interested, please comment and safely leave your email address. The giveaway offer ends on April 13th and will be announced on the 14th here.

Available in digital ebook:
Buy The Chaplain's Daughter at Amazon