THE UNEXPECTED CHAMPION by Mary Connealy, Reviewed by Kim 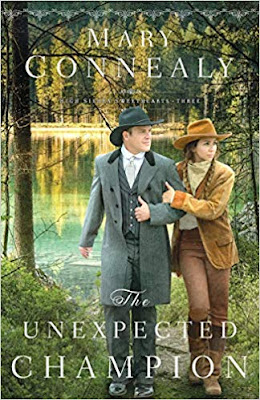 If you’re looking for a story that is full of unexpected twists and turns, action, witty banter, and has a great setting, this is the story for you! The Unexpected Champion is the third book in the High Sierra Sweethearts series but it can be read as a stand-alone. It is my favorite of the series.

The action begins almost from the very first page - it was totally unexpected and caught me completely off guard! The banter back-and-forth between Penny and John is pretty funny - especially during some really intense scenes. I love Mary Connealy’s sense of humor! I also want Penny’s bag and everything inside of it!

The Unexpected Champion is the third book in the High Sierra Sweethearts series but it can be read as a Stand-alone. It is definitely my favorite of the series.

*I received a complimentary copy of this book. All opinions are my own.

BackCover Blurb:
City dweller John McCall never expected to be out in the High Sierras of 1868 on a wild-goose chase to find the Chiltons' supposedly lost grandson. But now that he's out here, things have gotten even more complicated, mostly due to wildcat Penny Scott. She's not like any woman he's ever met--comfortable in the woods, with a horse, and with a gun.

When Penny and John are taken against their will by a shadowy figure looking for evidence they don't have, both realize they've stumbled into something dangerous and complicated. With their friends and family desperately searching for them, Penny and John must make a daring escape.

When they emerge back into the real world, they are confronted with a kidnapper who just won't stop. They must bring a powerful, ruthless man to justice, even as this city man and country woman fight a very inconvenient attraction to each other.