THE RUBY RING by Karen Rees, Reviewed by Paula Shreckhise 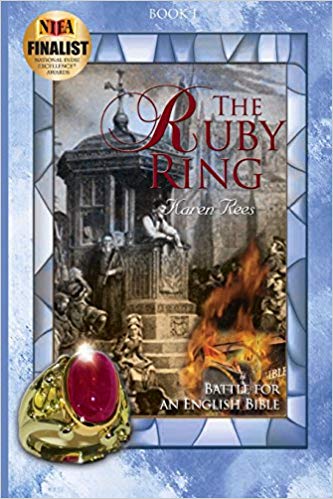 Paula offers this review from a favorite story published in 2013:
The Ruby Ring by Karen Rees is a historical novel taking place during 1535-1537 in England.

A renegade monk by the name of Martin Luther has sparked something in the English speaking world. William Tyndale is trying to translate the New Testament so that the English common man can read it for himself. The Church of England is against letting people have the Bible in their own language. They are out for control, power and money. The Church has strayed from preaching the Gospel and turned to calling for works for Salvation and having people buy favor from the Church- not the free gift of grace through faith in Christ.
Owen Alton is a friend of Tyndale and risks his life to get the scriptures into the hands of the common man. That jeopardizes his relationship with Jane Horne. Jane is trying to be obedient to her stepfather, Sir Harry, but is wary of the man Sir Harry wants her to wed. Jane and Owen want to pursue a courtship. When they are forced to part, Jane independently tries to help the cause to bring the English Testament to the English people. Will Owen and Jane meet again? How will their lives be impacted by this quest to get the true Word of God into the hands and hearts of the people? What part does the Ruby Ring play in the overarching story?

This was full of intrigue. The author has a wonderful way with words that describe what it was like in the 1500’s. I love learning about history through fiction and this fit the bill. I only wish there had been more scripture quoted. I would have liked to know which verses Jane was translating. All in all, this was a fascinating story.

*I received a complimentary copy of this book from the author as part of a book club discussion. I was under no obligation to post a review. All opinions are my own.*

BackCover Blurb:
2014 National Indie Excellence Award Finalist.
THE BATTLE BEGINS.
The year is 1524. William Tyndale makes the fateful decision to produce an English Testament without Church permission. He knows that a vernacular scripture will free the common people from spiritual domination by a corrupt and ignorant clergy. If Tyndale is caught, he'll die at the stake. So will anyone found assisting him. Owen Alton, a London grocer's heir, catches Tyndale's vision. But if he helps Tyndale, he'll be disinherited and lose Jane Horne, the minor-knight's stepdaughter he loves. Jane has defied her family in her desire to wed Owen. If he now should leave her for Tyndale.... As if she didn't have enough troubles, Jane discovers the shocking secret behind her mother's ruby ring.