A WALTZ IN THE WILDERNESS by Kathleen Denly, Reviewed by Paula Shreckhise 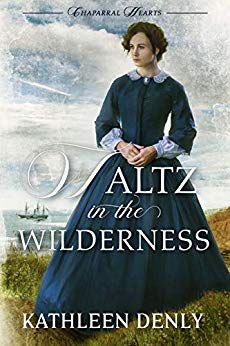 With a stubborn but loyal heroine and an honorable hero with a steadfast faith, this story is a bit complicated but that’s what makes it interesting and enjoyable. It was fun to read about Eliza Brooks’ journey into womanhood. The historical facts about early San Francisco and San Diego and ship travel of that time were fascinating. Daniel Clarke is a man with high principles, even as he is escorting Eliza into the wilderness to find her father. He tries to honor God and his fiancée but could he be falling for Eliza? Would they find her father? Would Daniel’s betrothed feel the same after four years apart?

Some characters had much to admire and others were fun to boo and hiss at.

This is the first of a series and I am anxious to see what is in store for the characters in the next book.
*I received a complimentary ecopy of this book from the author. I was not required to give a favorable review. All opinions are my own.*

BackCover Blurb:
She's desperate to find her missing father. His conscience demands he risk all to help.

Eliza Brooks is haunted by her role in her mother's death, so she'll do anything to find her missing pa—even if it means sneaking aboard a southbound ship. When those meant to protect her abandon and betray her instead, a family friend's unexpected assistance is a blessing she can't refuse.

Daniel Clarke came to California to make his fortune, and a stable job as a San Francisco carpenter has earned him more than most have scraped from the local goldfields. But it's been four years since he left Massachusetts and his fiancée is impatient for his return. Bound for home at last, Daniel Clarke finds his heart and plans challenged by a tenacious young woman with haunted eyes. Though every word he utters seems to offend her, he is determined to see her safely returned to her father. Even if that means risking his fragile engagement.

When disaster befalls them in the remote wilderness of the Southern California mountains, true feelings are revealed, and both must face heart-rending decisions. But how to decide when every choice before them leads to someone getting hurt?

Available in digital ebook and paperback:
Buy A Waltz in the Wilderness at Amazon