THE BLIZZARD BRIDE by Susanne Dietze, Reviewed by Paula and Trixi 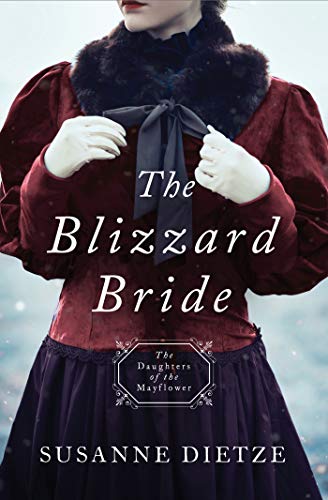 PAULA'S REVIEW:
In The Blizzard Bride, Abby Bracey is a schoolteacher in Chicago but she must leave because of a family scandal. Dash Lassiter, a childhood friend, is a Secret Service agent on the trail of a counterfeiter.

Abby and Dash meet again after many years and an abrupt and hurtful parting. They agree to go undercover to capture a notorious and elusive murdering counterfeiter. They must work together despite their animosity to discover the criminal’s son who is in hiding in Wells, Nebraska. Abby will fill out the term of a teacher who took ill and Dash will pose as a hostler because of his love of horses. They need to ferret out the clues without tipping their hand and also protect the innocent. Answers seem to be just out of reach. To make matters worse, the Great Snowstorm of 1988 catches all the people of Wells unawares and puts many in danger.

Ms. Dietze has done credible research into the Children’s Blizzard. Having lived a number of years in North Dakota and Northern Wisconsin, I could feel the cold and snow and remoteness. She helped me imagine how much more scary it would have been without modern conveniences.

Abby and Dash have much between them that needs forgiveness. Ms. Dietze shows the importance of acceptance and faith through the good people of Wells. This book had it all: inquisitive school children, a pet skunk, budding friendships, recaptured romance, a growing faith and history about a hard time in Nebraska. She also brings in the overarching theme of The Mayflower and Abby’s ancestors who handed down their Christian principals.
*I received a complimentary copy of this book from the author. I was not required to give a favorable review. All opinions are my own.*

TRIXI'S REVIEW:
“History offers us many examples of people who face trials but persevere.”~ page 249

I probably say this every time I read another book in the “Daughters of the Mayflower” series, but each one keeps getting better than the last it seems! The history lessons in them are fascinating and the wealth of research each author does is a treasure trove. If my school teachers were half as interesting as these writers, I would have paid much more attention in history classes!

That being said, Susanne Dietze is a masterful author in my opinion. I have read just about every Love Inspired historical book she had written until Harlequin closed the line down. So while I am very familiar with her writing voice, I feel she really shone in “The Blizzard Bride”! I'm so happy that she found a publisher to allow her talents and stories to come out in the world again. She has a way to draw the reader into her fictional world and step right into the pages as if the you were to live there. The city of Wells, Nebraska is one I think I would have loved to visit myself because the cast of supporting characters to Abby and Dash were ones I could see myself interacting with every day. I could hear the school children playing at recess, see myself chatting with the store keeper as I shopped and said a friendly hello to the post master as I purchased stamps or mailed my own letters. Dietze created a world in my mind with vivid details of setting and people.

The main characters Abby and Dash have a past love interest that ended abruptly when he left her without an explanation ten years prior. When they are thrown together to catch a killer and counterfeiter, those deep hidden feelings still stir under the surface. Abby is bitter and struggles to understand what happened, and Dash is regretful he never got the chance to explain his reasoning. So while they have to learn to deal with each other, they also have to keep a sharp eye out on identifying and bringing to justice a man called “the Artist”, all while keeping their real identities a secret from the friendly townsfolk. A task not so easy to pull off at times!

“Seeing her again, he had to laugh or cry, and frankly, it wasn't just her reaction to him that was hilarious. He'd always been an idiot when it came to Abigail Bracey”.~ page 17

“Maybe God brought us together again to write a better ending to our story. One where we can walk away as friends, or at least do our jobs without arguing every moment.”~ page 145

I loved everything about this story; there's mystery, a dash of danger, lovable characters, silly antics of school children, a real piece of history included about the blizzard, second chance love, and faith that is often tested leading to forgiveness, peace, and restoration. I admired how Abby easily shared the gospel truth and plan of salvation to two men who were despicable but still deserving of getting it right with the Lord. Just as all of us are!
*I received a complimentary copy from the author and was under no obligation to leave a favorable review. All opinions are my own. *
BackCover Blurb:
A Blizzard Changes Everything

Abigail Bracey arrives in Nebraska in January 1888 to teach school…and to execute a task for the government: to identify a student as the hidden son of a murderous counterfeiter—the man who killed her father.

Agent Dashiell Lassiter doesn’t want his childhood sweetheart Abby on this dangerous job, especially when he learns the counterfeiter is now searching for his son, too, and he’ll destroy anyone in his way. Now Dash must follow Abby to Nebraska to protect her…if she’ll let him within two feet of her. She’s still angry he didn’t fight to marry her six years ago, and he never told her the real reason he left her.

All Dash wants is to protect Abby, but when a horrifying blizzard sweeps over them, can Abby and Dash set aside the pain from their pasts and work together to catch a counterfeiter and protect his son—if they survive the storm?