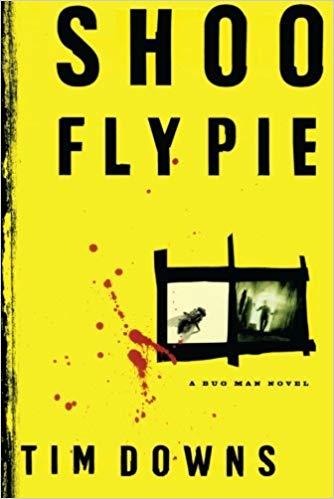 "I am a forensic entomologist . . . . I study the way different necrophilous arthropods inhabit a body during the process of decomposition . . . I'm the Bug Man."

When Kathryn Guilford's gut tells her that Jimmy McAllister's death was not a suicide, she makes a brazen decision to ignore the system and hire the reclusive, crotchety Dr. Nick Polchak, known to more than a few as the "Bug Man". She should have known after their first escapade (breaking and entering a funeral home?), that teaming with Dr. Polchak was going to be somewhat of an "off the record" experience, but it would have been impossible to predict the kinds of answers that she and the nearly blind eccentric were destined to unearth. . . . . . .

With a style all his own, this author has used every ingredient necessary to bake this quite memorable "shoofly pie" of a story.
*I purchased this book and was under no obligation to review it.

BackCover Blurb:
Forensic entomologist Nick Polchak (a.k.a. the Bug Man) is hired by thirty-year-old Kathryn Guilford, who is terrified of bugs, to solve her friend's death. When Polchak stumbles into the mystery of how Kathryn's husband was killed years earlier, the action kicks into high gear -- and Polchak finds himself on the run with his client from someone who will do anything to keep a secret.

This fast-paced murder mystery is more than the typical "Christian fiction;"it is good clean fun -- on a thrill ride. Biblical values are implicit rather than explicit, and its fascinating elements provoke thought on a conscience, consequences, and world-views. But mostly, this book is a sizzler of a story that will not let you go.