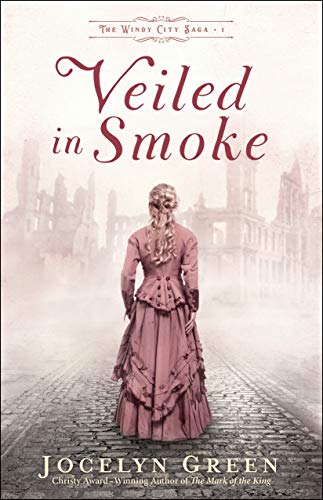 PAULA'S REVIEW:
A brand new series from Jocelyn Green starts with Veiled in Smoke a story of the Great Chicago Fire of 1871. Ms. Green has done extensive research into this significant tragedy. I’m so glad that she included information about other fires that occurred that day such as the Peshtigo, Wisconsin fire. I lived in Marinette County, Wisconsin for a number of years and visited Peshtigo and it’s Fire Museum. Not to mention that I grew up just outside of Chicago.

She has woven many interesting facts into her story, among them quotes from songs penned after the fire and tidbits from the life of Charlotte Bronte and her sisters.

This novel is about so much more than the fire that took a considerable toll on Chicago. Ms. Green brought to life not only the fire and it’s aftermath but also the struggles of the Townsend family. Stephen and his daughters, Meg and Sylvie, owned a bookstore and lost everything in the fire. The author shows the effects that the Civil War and imprisonment had on Stephen as well as conditions in the Cook County Insane Asylum. There is a murder mystery to figure out and questions of trust in God and their fellow man to work through.

Meg has injured her hands in the fire and dashed her hopes of being an artist: “Pain seared. Panic threatened. But there would be an end to this night, Meg told herself, an end to the ocean of flames surging toward them. There would be an after. This was not the end of the story, or at least, it didn’t have to be, though it looked and felt and sounded like the Last Day on earth.”

Ms. Green writes with such vitality that I was put right into the action. She captured and held my attention with the description of the fire’s devastation and the problems that seemed insurmountable after such an event. She also included hope, grace and mercy as Meg ponders: “What mercy that God was not limited by that which limited her. What grace that His power and presence remained, regardless of whether she felt close to them. She must trust Him for what she could not see. Wasn’t that the essence of faith? Her hands were bound. His were not.”

With a determined heroine and a kind and patient hero, this story is a winner.
*I received a complimentary copy of this book from the publisher on behalf of the author. I wasn’t required to give a favorable review. All opinions are my own.*

WINNIE'S REVIEW:
“I’m not afraid of storms, for the One who made the sea is in the boat with me.”

With a setting in Chicago in 1871 during the time of the Great Fire, Jocelyn Green once again makes history come alive with Veiled in Smoke, a story of great loss and tragedy along with hope, reconstruction, and growth. Having lost almost everything they owned in the fire, Meg and Sylvie and their father Stephen Townsend must rebuild their lives both physically and emotionally. The author deals compassionately, but realistically, with Stephen’s PTSD/Soldier’s Heart disabilities from fighting in the Civil War and his captivity and deprivation afterward, and the struggles his family has while trying to help him.

Green’s richly detailed descriptions and obvious deep research enhance the story greatly. Her colorful and complex characters come alive on the page with all their strengths and brokenness. I especially loved Meg’s strength in fighting through her physical limitations after the fire and her devotion to helping her family. Nate Pierce’s compassion and tender help to Meg’s family is very touching.

“We can never be who we once were, because we keep changing and growing. We’re not defined by our hurts, but by God’s grace we can overcome them.”

If you’re looking for a story rich in history, suspense, emotion, and inspiration with a touch of romance thrown in for good measure, you’ll enjoy this beautifully written tale. Threads of courage, hope, faith, compassion, and love of family are deftly and seamlessly woven throughout the pages. This book is bound for my keeper shelf while I try to wait patiently for the next in The Windy City Saga series.
*I voluntarily reviewed a complimentary copy from the author and Bethany House. All opinions are my own.

BackCover Blurb:
Meg and Sylvie Townsend manage the family bookshop and care for their father, Stephen, a veteran still suffering in mind and spirit from his time as a POW during the Civil War. But when the Great Fire sweeps through Chicago's business district, they lose much more than just their store.

The sisters become separated from their father and make a harrowing escape from the flames with the help of Chicago Tribune reporter Nate Pierce. Once the smoke clears away, they reunite with Stephen, only to learn soon after that their family friend was murdered on the night of the fire. Even more shocking, Stephen is charged with the crime and committed to the Cook County Insane Asylum.

Though homeless and suddenly unemployed, Meg must not only gather the pieces of her shattered life, but prove her father's innocence before the asylum truly drives him mad.
Available in digital ebook, paperback, hardcover and audiobook:
Buy Veiled in Smoke at Amazon
Buy Veiled in Smoke at Christianbook.com
Posted by Debra E. Marvin at February 05, 2020