THE THIEF OF LANWYN MANOR by Sarah E Ladd, Reviewed by Rebecca Maney 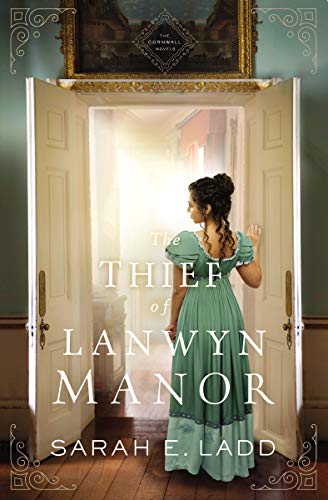 "Yes, Lanwyn Manor was proving to have introduced her to a number of interesting characters, but she needed to be wary. It was still too early to know whom she could trust and whom she could not."

Reeling from a broken heart, Julia Twethewey travels to her beloved cousin's country home located squarely in the heart of Cornwall's mining country, hoping that a change of scenery might mend the broken places deep within her soul. What she finds is altogether different than what she expected. Accosted before she even arrives at her destination, Julia also learns that her uncle's reputation among the local citizenry is tainted with disgust, his repeated reluctance to re-open his area mine has kept many miners from being able to support their families; causing local unrest and in some
cases, desperation.

When local mine owners Matthew and Isaac Blake gallantly step into the fray, in spite of being nearly identical on the outside, it's soon obvious that they are motivated quite differently on the inside. While Julia aunt's blatantly schemes for Julia to form an attachment with the one, it's the other brother who catches her attention, especially following their shared, quite harrowing experience on the evening of her arrival. In spite of the gentle whispers of her heart, Julia has learned the hard way that her head must not over indulge in romantic notions. Danger is lurking around every corner of Lanwyn Manor, there are mysteries to be solved, and someone is becoming more and more determined for Julia to leave.

The strength of this story is in its beautiful word flow. While the reader may wish that more conversations between Isaac and Julia were actually written down on the page, it's clear that their hearts become fiercely and inextricably entwined. Unfortunately, every relationship has its limits and the secrets embedded within the walls of Lanwyn Manor have the potential to stretch their budding attachment towards, or even past, their dreams of the future.
* I purchased this book and was under no obligation to review it, nor provide a positive review.

BackCover Blurb:
In Regency England an advantageous match could set up a lady for life. Julia knows Matthew Blake, copper mine owner and very eligible bachelor, is the gentleman she should set her eyes upon. But why can’t she steal her gaze away from his younger brother, Isaac?

Julia Twethewey needs a diversion to mend her broken heart, so when her cousin invites her to Lanwyn Manor, Julia eagerly accepts. The manor is located at the heart of Cornwall’s mining industry, and as a guest Julia is swept into its intricate world. It’s not long, though, before she realizes something dark lurks within the home’s ancient halls.
As a respected mine owner’s younger son, Isaac Blake is determined to keep his late father’s legacy alive through the family business, despite his brother’s careless attitude. In order to save their livelihood—and that of the people around them—the brothers approach the master of Lanwyn Manor with plans to bolster the floundering local industry. Isaac can’t deny his attraction to the man’s charming niece, but his brother has made clear his intentions to court the lovely visitor. And Isaac knows his place.