THE LOST LIEUTENANT and THE GENTLEMAN SPY by Erica Vetsch, Reviews by Winnie and Rebecca 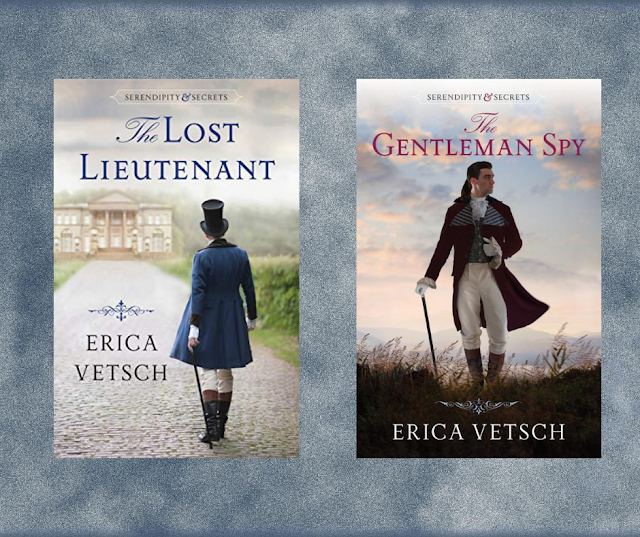 WINNIE'S REVIEW:
The Gentleman Spy by Erica Vetsch
What an adventure and treat it was to read Marcus Haverly’s story in The Gentleman Spy! I met him in the first book in author Erica Vetsch’s Serendipity and Secrets series, and I was definitely ready to see him get a happy-ever-after. Marcus wasn’t expecting or desiring to inherit a title, but when his father and older brother passed away unexpectedly, he ended up with more notoriety than was good for his job as a spy for the Crown. I loved his compassion, his determination, and his courage as he tried to fulfill all his many responsibilities and compartmentalize his life.

Lady Charlotte is intelligent, plucky, and ready to be out from under her parents’ caustic rule. It was amusing to see Marcus allow Charlotte enjoyment of her newfound freedom and the ability to develop her own passions. The growth of these two characters was so satisfying. Vetsch is a master at crafting endearing, flawed, colorful characters that come alive on the page. The stellar cast of secondary characters adds greatly to the enjoyment of the tale.

If you enjoy Regency romances with lots of intrigue, suspense, and a dash of inspiration, you’ll adore this series. Themes of forgiveness, mercy, and grace are woven tenderly through the story and add depth and dimension to it. Though this can be read as a standalone book, I’d suggest reading The Lost Lieutenant first to get more of the backstory. I’m eagerly awaiting the next book in the series.

REBECCA'S REVIEWS:
The Lost Lieutenant by Erica Vetsch
"No French soldier, no cannon fire, no smoke or broken, bleeding bodies. He wasn't on the battlefield . . . He wasn't fighting for his life. He was in the hospital. Still."

Evan Eldridge is suffering from terrible wartime flashbacks, insufferable nightmares and has no recollection of the battle that could have easily ended his life, rather than his career; making him wonder if some will deem him insane. Instead, to his complete astonishment, Evan is recognized by the Prince Regent as a hero, being awarded a title, property and a lovely, young bride. . . . . who is bringing secrets of her own into their union.

"What would it be like to live in a peaceful, happy home, where people were kind and treated one another with respect? Did such a household even exist?"

Diana Seaton has been viewed as a valuable commodity by her father for quite some time, but on the eve of being "sold to the highest bidder", she is suddenly paired with the newly titled Earl of Whitelock. The new earl seems like a kind man, but Diana's only experiences with men have not been pleasant ones, and yet as she is being whisked away to a new life, Diana makes a rash decision; the consequences of which have the potential to dramatically change the course of her new family's future. What has she done?

Allow the magnificence of this story to settle in, for readers will not only develop an instantaneous bond with Evan and Diana as they carefully navigate the dangerous relationship thrust upon them,
but they will also appreciate the carefully crafted surrounding cast, several of whom do not have the newlywed's best interests in mind. Conversation by conversation, hurdle by hurdle, one misunderstanding at a time; two solitary hearts cautiously tiptoe toward a union of hearts, and it's a beautiful thing to behold.
*I purchased this book and was under no obligation to provide a positive review.

The Gentleman Spy by Erica Vetsch
"I can be a married man and still maintain my freedom in other aspects. Charlotte will suit me fine. There when I need her and capable of being autonomous when I don't."

Compartments. That's how the new Duke of Haverly had been envisioning his life; in neat little compartments. Marcus had functioned in this manner for so long, he erroneously assumed that adding a wife, just added a compartment . . . . . not so. Lady Charlotte's brilliant mind drew him in like cold hands to a warm fire, but when her heart began showing, matching her outer beauty to what was hidden within, Marcus knew he was in deep, deep trouble.

"What did you expect? By now you should know better than to think that anything good would come your way or last more than a moment. God may be the giver of good gifts, for some, but not for you."

Lady Charlotte Tiptree had been overlooked and under valued for most, if not all, of her life. Threatened to a life of spinsterhood by her overbearing father, he delivers a shocking ultimatum; find a husband or become relegated as a companion for her insufferable aunt. Imagine her surprise when the answer to her dilemma arrives in the form a handsome enigma. . . .was the Duke of Haverly's offer a dream come true, or the continuation of a living nightmare?

Undoubtedly, one of the most romantic stories that you will ever read! And suspenseful! And inspiring! May it come as no surprise if you close the book only to open it back to the very first page.
*I purchased this book and was under no obligation to provide a positive review.
4.5 stars