THE LOST LIEUTENANT by Erica Vetsch, Reviewed by Winnie Thomas and Paula Shreckhise 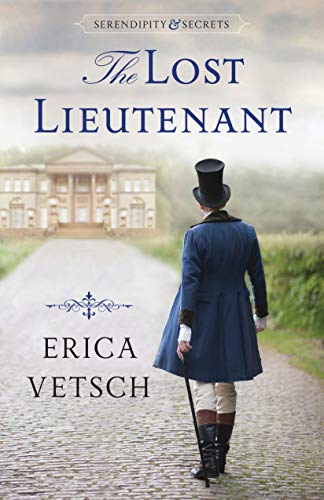 WINNIE'S REVIEW:
Erica Vetsch’s writing shines in this captivating start to her new series. With a gorgeous cover, a unique story line, and colorful, well-drawn, and endearing characters, this story captured my attention and heart from the first. Though traumatized by war injuries and events, Evan Eldridge is a magnificent hero—caring and tender, but also courageous and protective when needed. Diana Seaton is brave, determined, resourceful, and willing to do what she can to make a safe home for herself and her baby nephew.

Brimming with rich historical detail, suspense, and doses of inspiration and romance, The Lost Lieutenant has earned a place on my keeper shelf and left me anxiously awaiting the next book in the series. In addition, Erica Vetsch is going on my list of favorite authors.

PAULA'S REVIEW:
One of the best Regency books I have had the pleasure of reading.

Erica Vetsch plus Earls, Dukes, the Prince and a damsel in distress is a recipe for Regency Gold! This start to a new series is beyond impressive. She even writes her reprehensible villains with panache.

Evan Eldridge and Diana Seaton find themselves in daunting circumstances which are compounded by an edict to wed from Prinny himself: “You don’t say no to the Prince Regent.”

A grateful Prince bestows a title on Evan along with a holding that is in shambles. He finds he is ill equipped to be a part of society, much less manage an estate. Evan is still dealing with injuries incurred in battle. “The nightmares stalked him, the sense of impending doom, the panic he tried to lock away but that swarmed over him like a breach in the line every time he let down his guard.”

Diana is in an untenable position, a veritable pawn in the hands of her father. She has secrets to keep from her new husband.

Ms. Vetsch writes plausible situations and fresh characters. She gives Evan and Diana a background of faith that they draw on and has them struggle to do what is right and what is expected of them.

Ms. Vetsch has proved why I come back to the Regency Era time and again. She writes a romantic, compelling tale that has you yearning for more. She includes a good portion of the first chapter of the next book to whet your appetite for the continuing story. Five Star read!
*A complimentary copy of this book was provided by Kregel Publishers through Interviews and Reviews. I was not required to give a favorable review. All opinions are my own.*

BackCover Blurb:
He's doing what he can to save the Prince Regent's life . . . but can he save his new marriage as well?

Evan Eldridge never meant to be a war hero--he just wanted to fight Napoleon for the future of his country. And he certainly didn't think that saving the life of a peer would mean being made the Earl of Whitelock. But when the life you save is dear to the Prince Regent, things can change in a hurry.

Now Evan has a new title, a manor house in shambles, and a stranger for a bride, all thrust upon him by a grateful ruler. What he doesn't have are all his memories. Traumatized as a result of his wounds and bravery on the battlefield, Evan knows there's something he can't quite remember. It's important, dangerous--and if he doesn't recall it in time, will jeopardize not only his marriage but someone's very life.

Readers who enjoy Julie Klassen, Carolyn Miller, and Kristi Ann Hunter will love diving into this brand-new Regency series filled with suspense, aristocratic struggles, and a firm foundation of faith.