LET IT BE ME by Becky Wade, Reviewed by Rebecca Maney 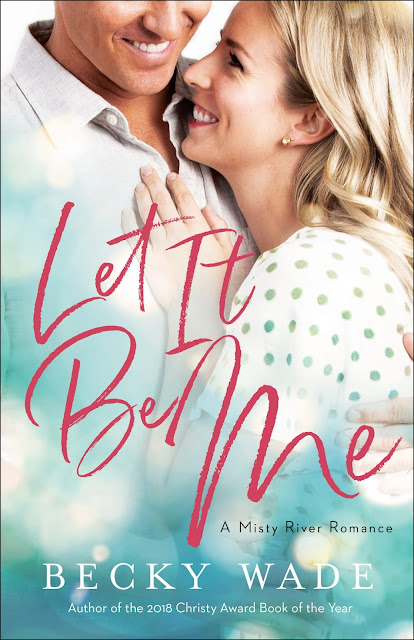 "Some things might have gone wrong on that day, but you weren't one of them."

Confused by the results of a DNA test, Leah Montgomery's world has become larger in some ways and smaller in others. Considered a math prodigy, Leah had put her PhD. aspirations on hold to raise her younger brother Dylan, choosing to teach high school math in the interim. Her hyper logical brain has routinely convinced her that she is not marriage material; falling in love doesn't even compute. . .  until Dr. Sebastian Grant wrecks all her tidy equations.

When pediatric heart surgeon Sebastian Grant is involved in a one car accident, his first recollection is that of an angel. Of course the "angel" in question is a beautiful young woman who remains on the scene until rescue vehicles arrive, leaving Sebastian to realize that he wasn't even coherent enough to ask her name. Months later, her name might as well be in the headlines of a local newspaper blaring OFF LIMITS. His best friend Ben has been raving about Leah Montgomery for months. . .  his best friend. . .  for months.

With a nearly flawless story flow, the author weaves her readers in and out of multiple scenarios showcasing Sebastian and Leah's futile attempts to ignore the magnetism between them; Sebastian out of loyalty and Leah out of utter confusion. Sebastian remains determined, but in spite of his success he is also broken, struggling mightily to believe that God has been beside him in the darkest of days, proving Himself sovereign as well as good. Along similar lines, Leah is learning to relinquish control over the things that God has already promised to do on her behalf.

And along the way, there arises the most beautiful of love stories.
* 4.5 stars. I purchased a copy and was under no obligation to provide a positive review.
See Nicole's Review!
ABOUT THE BOOK
The one woman he wants is the one he cannot have.

Former foster kid Sebastian Grant has leveraged his intelligence and hard work to become a pediatric heart surgeon. But not even his career success can erase the void he's tried so hard to fill. Then he meets high school teacher Leah Montgomery and his fast-spinning world comes to a sudden stop. He falls hard, only to make a devastating discovery--Leah is the woman his best friend set his heart on months before.

Leah's a math prodigy who's only ever had one big dream--to earn her PhD. Raising her little brother put that dream on hold. Now that her brother will soon be college bound, she's not going to let anything stand in her way. Especially romance . . . which is far less dependable than algebra.

When Leah receives surprising results from the DNA test she submitted to a genealogy site, she solicits Sebastian's help. Together, they comb through hospital records to uncover the secrets of her history. The more powerfully they're drawn to each other, the more strongly Sebastian must resist, and the more Leah must admit that some things in life--like love--can't be explained with numbers.
Bethany House Publishing, May 2021
Available in digital ebook, paperback, hardcover, and audiobook:
Buy Let It Be Me at Amazon
Buy Let It Be Me at Christianbook.com
Buy Let It Be Me at Baker Book House