MATCHED AND MARRIED by Kathleen Fuller, Reviewed by Kim 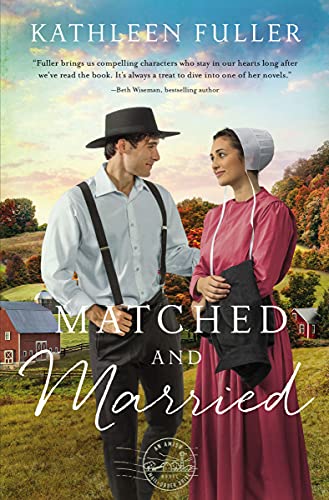 Matched and Married by Kathleen Fuller is the second book of this series. It can easily be read as a standalone, though. I have not read the first story and I was not lost at all.

I have to admit that I struggled a bit with this story. Well, mostly, I had trouble connecting with Margaret. Basically, for the first half of the story, she’s all about how a person looks on the outside, not who they are on the inside. And as far as Owen was concerned, she was very negative. While I know that she changes, I felt like it was just a bit much and it made me dislike her. I did enjoy the second part of the story more when Margaret and Owen strike up their friendship and she begins to change.

This is a quick sweet read and I would say if you like Amish stories, give this one a try!
*I received a complimentary copy of this book. All opinions are my own.

BackCover Blurb:
Neither Margaret nor Owen has any interest in getting married. But in the small Amish town of Birch Creek, where marriage is on everyone’s mind, their plans don’t stand a chance.

Margaret Yoder can’t seem to catch a break. Even though she’s dedicated to her Amish faith, her wild rumspringa won’t stay in the past, and her mother keeps pressuring her to get married. To placate her mother and get away from former “friends”, she decides to return to Birch Creek to visit family—and pretend to find a husband.

Like Margaret, Owen Bontrager isn’t looking for a spouse, something that’s hard to avoid in Birch Creek, where an ad for brides in the local paper has brought a swarm of single women to the thriving town. When he meets Margaret in an unexpected way, they discover they have more in common than they ever expected. In some ways, they are a perfect match.

Margaret struggles to keep her goal of avoiding romance in order to focus on being a faithful member of the Amish church, and it doesn’t help that she finds Owen intriguing. Knowing they don’t have a future together; she returns home and gives in to her mother’s insistence that she get married.