GLIMMER IN THE DARKNESS by Robin Patchen, Reviewed by Rebecca Maney 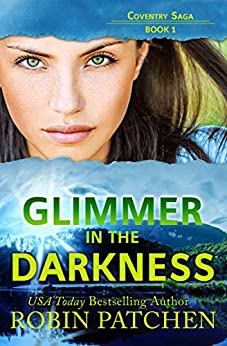 A desperate plea from a voice from his past, James Sullivan can scarcely believe his eyes or ears. She looks different, older, more mature . . . but amazingly gorgeous. Is Cassidy LeBlanc a cold blooded child killer like everyone in the small town of Coventry seems to believe, or has she been terribly misunderstood and betrayed by the very justice system that should have protected her as the victim of an horrible crime? Right now, it's irrelevant what everyone else believes, James must decide for himself what to do with the terrified woman cowering in his backyard.

As James and Cassidy push their own tragic history into a locked compartment, they race to find a small child who has been kidnapped, presumably by the same person who snatched Cassidy, along with James' young sister, ten years earlier. Cassidy is certain that the child is being hidden in a remote cave, if only they can find it; her recollection of the incident is sketchy at best and filled with tortured memories, the worst being guilt.

What a great story! Extraordinary plot, wonderful characters, intense pace, palpable romance, impressive spiritual depth, and an ending that will satisfy each and every reader with the reminder that we are loved by. . .

BackCover Blurb:
From a USA Today bestselling author comes this edge-of-your-seat Christian suspense that will keep you reading all night long.

Nothing could get her home…but this.

Cassidy Leblanc worked hard to shake off her tragic childhood. As a foster child with a mother in prison for murder, she was an outcast in her small New Hampshire town until she met James. But she and James’s sister, whom she was babysitting, were kidnapped. She escaped, but Hallie didn’t survive, and everybody assumed Cassidy killed her. Like mother, like daughter, after all. With public opinion and the authorities united against her, young Cassidy fled. Now, a decade later, another little girl has been kidnapped, and Cassidy may be the only person who can find her.

He doesn’t know who to trust.

James Sullivan never believed that Cassidy killed his sister, no matter what the authorities said. When his best friend’s daughter goes missing a decade after Hallie's murder, James keeps his opinions on the matter to himself. But when he finds Cassidy sneaking around his property, his thoughts turn dark. If she’s not behind the recent kidnapping, what is she doing back in Coventry? Her answer—that she’s returned to find little Ella, and she needs his help—has him reeling. Can he trust Cassidy, despite what the police tell him? If there’s any chance he can save Ella, he has to try.

Danger lurks on the mountain.

Together, they search for the elusive cave where Cassidy and Hallie were taken, but somebody will stop at nothing to make sure they don’t find it or, if they do, that they don’t come out alive.

Pulse-pounding suspense, a second-chance romance, and a precious little girl who needs her daddy. You don't want to miss it.

January 2021
Available in digital ebook, paperback, and audiobook:
Buy Glimmer in the Darkness at Amazon