Just One More Day Without Snow

The History Channel, AMC, BBC America, The Weather Channel, PBS, Food Network, The Travel Channel. That’s all. Can I get just the cable channels I want?

I do have basic: 19 channels plus #23. The Weather Channel sneaks its way into my house, clear-imaged but with an annoying static fuzz. So I watch silent radar images, arching fronts, on-scene reporters. Transfixed. I’m a weather geek. I even remember when Jim Cantori had hair. 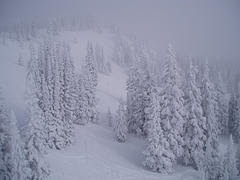 So this post is how a history nut works her weather passion into this week's theme:
an epic event known simply as “the Donner Party”.
The 1840s. Ahh, such a sweet decade in English literature! On this side of the pond, a booming, mass migration of U.S. Easterners swarmed along trails like ants to the wide open lands of the west. California and its rolling, golden hills waited, just out of reach in each night’s alluring sunset.

The unknown man behind the Donner Party disaster was Lansford Hastings. He’d gone west and come back with the idea of writing a guide book to lead parties westward. A great American success story—if it had worked. Mr. Hastings had never really taken the route he suggested. 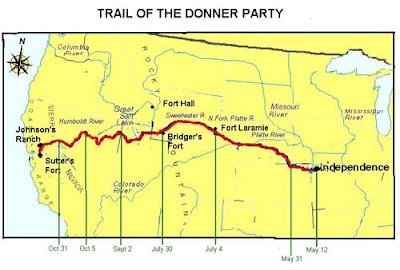 Mr. Hastings, always just ahead on the trail, left word he'd wait for any interested parties to join him at Fort Bridger. Hundreds of pioneer families had to make the choice: follow the old tried and true trail, or take a chance on Hastings’ new shortcut. Most took the advice of an old mountain man and took the established route. On July 31st, now nearly half way to California, nine families and sixteen single men split off to follow Hastings.

The new route was brutal. They had to double team their wagons to get them up mountains and through canyons. It took them a month to get where they’d expected to be in a week. Their next message from Hastings encouraged those who’d followed to forge on and prepare for a two day "dry" crossing of the great salt desert. At this point, the end of August, they still had 600 miles to go before winter closed the Sierras.

On the third day of crossing the desert, their water ran out. Oxen died, cattle ran off, never to be seen again. Everyone suffered from exhaustion, dehydration and the extremes of heat during the day and freezing temperatures at night. Much of their belongings were left behind. By the time they made it out of the desert--a five day ordeal, not two days as they'd been told--all the other immigrants from Springfield had arrived in California except for the group known as the Donner party.

Bitterness fed by exhaustion burned through the group. Mr Reed was put out of the camp after killing his teamster for beating an ox. He went on alone, while his family continued with the party, many of whom were now walking to lessen the oxen’s work. A sick old man was left behind to die before a Paute raid took many of their remaining oxen and cattle. 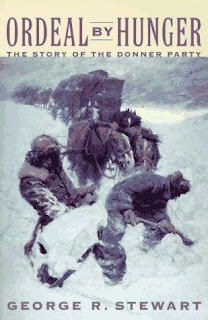 The party reached Nevada's Truckee River on October 18th. One of the men who’d gone ahead for supplies returned with food, two guides, and a new deadline. They had to get through the mountain pass within a month to beat the winter snows.

George Donner cut his hand while fixing a wagon axle and sent the rest ahead. The majority made it to just below the summit and decided to wait for the Donner family. A few days later the entire party reunited near the highest pass. after a brutal uphill battle over muddy, frosty and very steep inclines. They had crossed 2400 miles in seven months. But they missed getting to their destination 150 miles away by one day. That night a blizzard filled the pass with five feet of snow.


They turned back to build a winter camp on Truckee Lake.

The details here are long and arduous, too many and too chilling to recount. Very few will ever know the extremes of weather and hunger the Donner party went through. There wasn’t just snow for one night but days of snow at a time, often blanketing their makeshift lean-tos and huts until they disappeared under the accumulation. By Thanksgiving, twenty foot drifts were common. Some of the party left, desperate to find food and rescue.

Mr. Reed, banned from the party weeks earlier, arrived at their destination in California only to learn the rest of his group had never made it. For five more months, the stranded immigrants fought to survive and rescuers, including Reed, risked all to locate those survivors. You must know by now that some of them did survive.

The details found in first person accounts, diaries and interviews give grueling testament to the power of the human desire to live. Some deny and some admit to resorting to cannibalism. Very few stories can meet this one as a compelling ‘human interest’ story.

On April 21st, 1847, almost one year from the date they left Springfield, the last of the Donner party left Truckee Lake (now Donner Lake) to start their new lives in California. 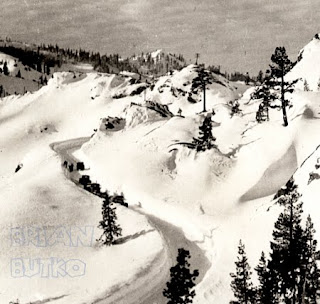 While the morbid and gruesome nature of this story may stir your interest or disgust you, I find the personal details of their struggle to survive in such extreme conditions fascinating. I complain when it takes too long (more than five minutes) for my truck to heat up in January. I get irritable if I'm unable to meet my appointed meal time and feel hunger for that extra hour. I complain when my cross-country flight is delayed and I have to sit in the airport for an extra 45 minutes.

What could I survive if I had to? What would I do to make sure my children survived?
What about you?

What stories of human struggle for survival have captivated your imagination? Have you ever had to deal with extreme heat, cold, snow or even hunger and thought how absolutely easy our lives are compared to so many others, past or present? I'd love to hear your thoughts.

The Donner Pass photo just above shows cars climbing the same route under the same conditions, well, except for snow plows and the combustion engine. Courtesy of BrianButko. Colorado snows (Header Photo) courtesy of Gregory_y/Flickr.