I, Debra E. Marvin, had great plans to be your roving reporter and share a movie review of LETTERS TO JULIET. A vicarious trip to Italy. Sigh.
Oops. Waited too long.

So . . . what could be better, says I, than mixing my favorite things together . . . Period piece movies, creating charts, and browsing the internet for photos of the Men of Austen.
“Oooh” says you. “That DOES sound smashing!”

You'll be disappointed to learn I couldn't get my charts to come out with decent columns. Sorry.
So loose the lacings on your stays, my friend, it’s time for a battle of epic proportions.


It’s time for an Emma Smackdown


(This is where silly Miss Bates of the charming village of Highbury, England says
“It left us speechless, quite speechless I tell you, and we have not stopped talking of it since.”)

Are you ‘clueless’ about how many Jane Austen websites and blogs (and people who need some serious medications) there are? Here’s one of my favorites: check out guest Kaye Dacus’ comparison of Sense and Sensibility—well don’t rush off yet, wait till I'm done— http://http//janitesonthejames.blogspot.com/2008/04/sense-sensibility-head-to-head.html

As you can see, this bang-on “big idea” I had, has been done before. And much better. But this is my blog (er, mine and 14 other's) and I’m going to do it anyway. “Depend upon it.”
Without further ado** , I compare three of the nine versions of Emma. You'll love the pointless information and gratuitous photos of cute guys. It’s the least I can do for all my hours of Austen movie pleasure.

(**Note to self, look up ado in the dictionary)

Which is your favorite version of EMMA?
Emma Woodhouse, handsome, clever, and rich, with a comfortable home and happy disposition, seemed to unite some of the best blessings of existence; and had lived nearly twenty-one years in the world with very little to distress or vex her. 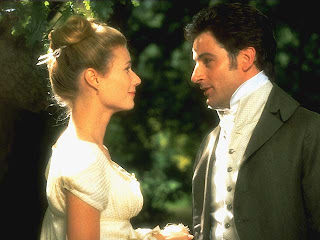 (Sorry ladies, I was unable to find one in his character role as Frank Churchill. I think it's because he has possibly the worst hair 'do' I've seen outside of a Dickens novel. He had a nice singing voice though.) 121 minutes


Here goes. Try and keep up. The movie had many dark interior scenes--more true to life? Well, I won't keep you in the dark on my opinions: Gwyneth as Emma. Not bad. Compared to the others, it was a bit reserved. In opinion polls, and there really are opinion polls, Jeremy Northam consistently outranks Mark Strong as Mr. Knightley. He certainly gets my vote for best dancer. This film boasts the silliest, flakiest of the Miss Bates characters and I could have sworn Mr. Elton was played by PeeWee Herman.

Miss Smith. In comparison to the others, she seemed older and not as innocent. The bloom was a bit off the rose, shall we say? Jane Fairfax was pretty, a marvelous singer and hid a little fire behind her eyes that I didn't see in the other two. Overall, the 1996 Hollywood Emma is probably the standard for most people. Not for me.

1996 Emma option#2 The Kate Beckinsale Version, aka the A&E version. Mark Strong as Mr. Knightley, Samantha Morton as Miss. Smith, Olivia Williams at the most composed Jane Fairfax ever. “I quite rave about poor Jane Fairfax.” Behind the scenes are the powerhouse pair of Screenwrighter Andrew Davis and Producer Sue Birtwistle (Pride and Prejudice 1995, aka the Colin Firth edition, silly girl). 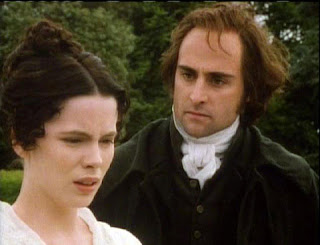 This version boasts my favorite Mr. Woodhouse. Not so frightened of life that he annoys the poof out of my up-do, and Samantha Bond is my number one Mrs. Weston. The right age for being Emma’s ex governess and yet not too young to be Mr. Weston’s wife. Very likable. More on the wrong Mrs. Weston later. 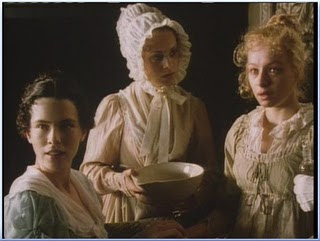 Samantha Morton plays a mousy but not completely irritating Miss Smith. And I have a warm and fuzzy feeling about how they let her hair be, well, fuzzy. I so understand that. Apparently, I too, often look as thought I've been set upon by gypsies!

The ‘Mr. Elton’s carriage ride proposal scene’ ranks #1 for me, and so does his loudmouthed wife. I want to pull her hat off and throw it in the pond every time I hear that shrill voice say “Knightley!” (No, not THAT pond at Darcy's Pemberly estate. Please, you're confusing me.)

This version's Mrs. Bates, the object of Emma’s thoughtless teasing during the Box Hill Picnic, is the chattiest of the three. That's a lot of chatter.
The biggest pro/con of the "Kate" version is Mark Strong. Many people find him too . . . cool, reserved and quick tempered. Dark. He does do a nasty villain in the new Sherlock Holmes, after all. I have to smile when he does (smile, that is), because it's so unexpected. I do like the way Emma is surprised by her feelings for him in this movie, because it is not ‘too’ obvious to the audience, either. “Brother and Sister? No Indeed!” 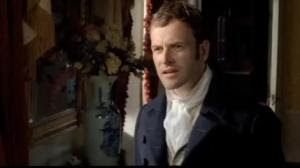 And, because we needed another Emma: option #3. The newest of BBC’s attempts stars Romola Garai. Sorry, I can’t even pronounce her name. Jonny Lee Miller as Mr. Knightley, Michael Gambon as Mr. Woodhouse, Jodhi May as Mrs. Weston, and Rupert Evans as Frank Churchill.

Hurrah, we finally have a three part mini-series at 240 minutes. I wave my handkerchief with a gloved hand, in celebration!

Romola is a new face to American audiences. Her portrayal is the most like a 20 yr old girl; not so witty as Gwyneth’s or as cool and composed as Kate’s.

She’s bubbly and cute and when she has regrets over her actions we see a much more vulnerable girl. A lonely girl. I liked that. According to my sources, fewer people tuned in for the new Emma than expected and after it’s first night’s broadcast, less returned. I admit I wondered why they needed a new Emma. Well, they didn’t. But it has grown on me nonetheless, and I believe it has risen to the top spot. Which gets me thinking of clotted cream and scones . . .

Louise Dylan as Miss Smith is neither mousy nor spineless and of a perfect age. She’s easier to accept as a friend to Emma. The ex-governess, Mrs. Weston, seems more peer than mentor. For me, the choice of Jodhi May was all wrong. Much too young to be Mrs. Weston. Jodhi stole the show in Daniel Deronda--if you haven’t seen it, I suggest you do.

Jane Fairfax and Frank Churchill? Jane is more emotional and not so much an enigma as the others were. Rupert Evans as Frank shows more regret over his situation also, not so full of himself. Again-more vulnerability. However, the scene at Box Hill, where he and Emma get out of hand with their flirting and their dissing of both Jane and Miss Bates, deserves a very severe warning from the Janites. (that's Jane-ites.) Never. Never would a woman of Miss Woodhouse’s station allow a gentleman to lay his head on her lap in the presence of others. Not very gentlemanly. "You seem determined to think ill of him." Rightly so.

In conclusion, we come to my thoughts on the third Mr. George Knightley, Jonnie Lee Miller. Despite my interest in Glasgow, Scotland, I have stayed away from the movie Trainspotting, so I knew little of his previous roles. (Same for Robert Carlisle, who I only know as Hamish MacBeth.) Didn't even watch Eli Stone. Is that still on? 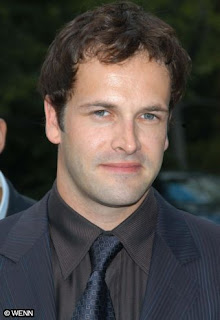 I wonder if he read the reviews of the other two Knightleys- Northam and Strong. He plays a very likable, softer, less irritable Knightley. Well, just look at him. I mean. Come on. He’s no pushover though—the scene where he and Emma argue over Harriet Smith’s refusal of Robert Martin’s proposal is top notch. Jonnie Lee Miller shows a gentlemanly restraint and passion without the harshness. “It is better to be without wits, than to apply them as you do.”
Okay, I think he’s the cutest of the three. Does that suffice? So he’s my favorite. And, yes, I have shoes older than he is.

If nothing else, and Hello, you're still reading this?, I hope you take the opportunity to watch one, or two or three of the Emmas. Nine would be a bit of a feat. If I was truly as devoted as Jane deserves, I would have read Emma again to see where the screenplays deviated from the novel, but I do have a life you know. Sort of.

So, seriously, have you watched more than one Emma and what did you think? Which is your favorite version? your preferred Emma or Knightley?

Shall we do this again, with the P and P, or the S and S?
Thanks for visiting. Although I make it a point not to be home to guests until 12:00, I've made an exception in your case.