A DEFENSE OF HONOR by Kristi Ann Hunter, Reviewed by Paula Shreckhise

A Defense of Honor by Kristi Ann Hunter is a Regency piece set in London and Marlborough in 1816. It is the first of a fascinating new series by Kristi. 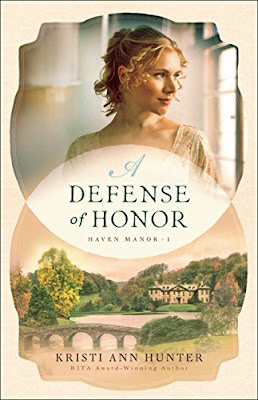 Kit FitzGilbert and her friend Daphne are hiding in the countryside after fleeing London society over a decade ago.
Graham, Lord Wharton is bored waiting to become an Earl but wants nothing to do with the frivolous pursuits of most of his peers. In other words, he wants to make a difference.

This novel is anything but boring! Kristi enchants us again with a tale of England’s upper crust in the Regency Era. She is one of my favorite authors.

Kit and Graham meet by chance at a ball. Graham is curious about an elusive lady in green. Perhaps trying to find her will cure his boredom.

Although this novel has that signature Kristi Hunter humor, this book is different from Kristi’s other books in that it touches on a more serious matter. She deals with attitudes that were prevalent in 1816 and are no less relevant today. She handles them through the faith of her characters. Each is striving to do the right thing. Graham talks to Kit while trying to understand why she does what she does. “ Grace doesn’t work like that, Kit. I know my life’s been pretty easy, and my sins wouldn’t make anyone blush, but I’m not perfect and I’ve read the Bible enough to know that grace doesn’t come because of anything you can do. Jesus didn’t die and rise again so you could crucify yourself with guilt.” Kit begins to question her motives and methods as she goes about helping the less fortunate.

There are many spiritual lessons to learn from this book. Among them, as Graham says: “ The most precious gems are forged from pressure. God brings beauty from adversity, when you let Him.”

A Defense of Honor is a beautifully written historical story whose principles can be applied to the present. I was pleasantly surprised at the solution to a very complicated problem.

I would recommend this book to fans of Christian Historical Fiction, who would like to see how a complex issue is handled.

BACK COVER BLURB:
When Katherine "Kit" FitzGilbert turned her back on London society more than a decade ago, she determined never to set foot in a ballroom again. But when business takes her to London and she's forced to run for her life, she stumbles upon not only a glamorous ballroom but also Graham, Lord Wharton. What should have been a chance encounter becomes much more as Graham embarks on a search for his friend's missing sister and is convinced Kit knows more about the girl than she's telling.

After meeting Graham, Kit finds herself wishing things could have been different for the first time in her life, but what she wants can't matter. Long ago, she dedicated herself to helping women escape the same scorn that drove her from London and raising the innocent children caught in the crossfire. And as much as she desperately wishes to tell Graham everything, revealing the truth isn't worth putting him and everyone she loves in danger.

*I received a complimentary copy of this book from the publisher on behalf of the author. I was not required to give a favorable review. All opinions are my own.*
Posted by Debra E. Marvin at June 21, 2018