THE CAPTURED BRIDE by Michelle Griep, reviewed by Rebecca Maney

"Kahente means 'before her time'. . . . . . . .You speak your mind without pausing to listen to reason. You don't wait for danger to pass but run headlong after it. So in those respects, I would say you are before your time, for there's nothing patient about you. Kahente." 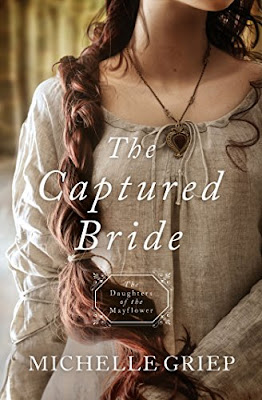 My, but Mercy Lytton was a beautiful woman; strong, proud, intelligent and gifted with the eyes of an eagle. She fascinated Elias Dubois, but fascination with a woman could prove to be a dangerous thing when your life was on the line, and there was a wagon load of French gold to be delivered into the hands of the British; unfortunately, upon its safe arrival Elias faced prison time as a traitor. He was a man without a country, truly, for no one knew his secrets or when he would have to resume his real mission.

Mohawk blood runs fast and furious within Mercy Lytton's veins; her mixed heritage both a blessing and a curse. Working as a British scout had paired her with the best of the best, Captain Matthew Prinn, who had become a surrogate grandfather over the years. When tasked with escorting an enormous cache of gold and silver, she never imagined that a condemned criminal would be added to their team. . . . . . posing as her husband.

Slowly Mercy and Elias develop a mutual respect, all while Elias is becoming increasingly aware of the predicament that he soon faces, for "he would . . . be putting a forever kind of distance between him and the only woman he's ever thought twice about." This story, filled with the kind of danger that only the wild frontier during the tumultuous years of the French and Indian War could possess, will undoubtedly capture many hearts; the hearts of its readers.