“I will be with you, your troubles to bless.” 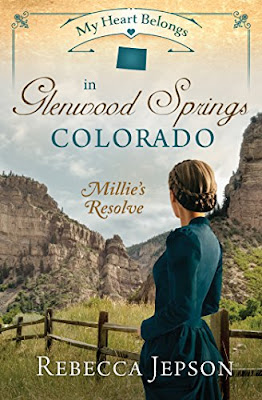 "Millie's Resolve"
I’m still befuddled, my heart still racing and my emotions still raw from this story so forgive me if my review makes little sense! It packs a punch that leaves you wanting more of these characters even though it has a very satisfying, if not nail biting ending. Seriously, you’ll be on the edge of your seat like I was in more than a few scenes. Without giving much of anything away, it’s so hard to form a coherent review that still makes the reader long for it; as if they simply can’t live without reading this for themselves!

Millie, what can I say but I love her! Coming into her own after a heartbreak six years ago; from a lowly fisherman’s daughter to respected nurse. Fleeing her past life to start over must have taken great bravery & determination. She’s caring and has a natural knack for making her patients feel at ease, even in the midst of their suffering. I don’t think there’s a stranger she’s met yet, or they wouldn’t be for long after meeting her. But as it happens in some stories, the past catches up to her in human form and she either meets it head-on or shrinks back to the mousy young woman she was.

Ah yes, the older brother John! The one that stole what could have been her happily-ever-after with younger brother Stephen. He feels the weight of responsibility on his shoulders after their father died years ago. Making decisions that best suited the family in spite of great pain he inflicted on the young lovers. If it weren’t for his mother’s failing health and the concern for Stephens’s pregnant wife, he would have never sought out or asked for Millie’s help. As for Stephen, well, he has his hands full with his young family and many regrets about the past. Since I don’t wish to spoil it for other readers, that’s all I will say about the story.

Past meets present; cue the tension, conflict and drama as these three lives collide under vastly different circumstances! This has a depth that I didn’t see coming and stole my breath at times. I was so invested that the world around me disappeared. Did someone say romance…oh my…I needed my fainting couch & smelling salts or at the very least a fan blasting ice cold in my face! I was a puddle melted on the floor. What clinched this for me was the strong faith thread. It comes naturally and in all the right places without being overbearing or as some would say, preachy. The characters struggled with their faith in very real ways that we might find our own selves doing. I can’t recommend this enough; I didn’t want it to end! I felt like the author could have made it longer if she wanted to and it still would have not been long enough for me. That’s how good this is!

BACK COVER BLURB:
Journey now to healing spa town of Glenwood Springs, Colorado in 1888
Where the past and present collide and a woman is on the precipice of unexpected love.

Millie Cooper, fisherman’s-daughter-turned-nurse, flees a painful entanglement with the wealthy Drexel family who summered near her childhood home in Nantucket, only to encounter them again six years later in Glenwood Springs. The serenity of her mountain hideaway in a town with healing springs is disrupted when she faces caring for the elderly mother and the expectant wife of Stephen Drexel, the man she’d once loved—at the request of his brother John, the man who’d kept them apart. Will Millie forgive the wrongs she feels were done to her, or will she come to see them as a blessing in disguise that leads her to greater joys?