The Road to Magnolia Glen is book two in the Natchez Trace series and furthers the story of Conner and Isabella from The Promise of Breeze Hill. The heroine, Kiera, is a fiesty Irish lass. The hero, Quinn, is a responsible, determined, hardworking young man who has yet to realize his dream. 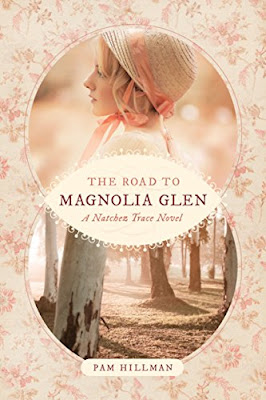 I so loved the setting of this book in the Natchez Trace of 1792. I had fun picturing the docks of the early town and the Plantations of Breeze Hill, Braxton Hall and the estate owned by the Wainwrights. The Young sisters: Kiera, Amelia and Megan and the O’Shea brothers: Quinn, Rory and Patrick meet onboard ship on their journey to the Colonies. Quinn is taking his brothers to meet their eldest brother, Conner, at Breeze Hill. The Young sisters have come because their brother-in-law has secured a husband for Kiera in Natchez. Little did they know that Pierre LaBonne, her so called intended, is a scheming liar and holds papers saying he owns them.

Can Quinn and Conner keep Kiera and her sisters from the nefarious clutches of the vile LaBonne? By helping the girls, are they endangering themselves and their loved ones?
The characters were so engaging from the O’Shea brothers, to the Young sisters, to baby Jon Wainwright. The  evil LaBonne and his lackeys were villainy at its best.

If you enjoyed the first book in this series, then you will want to read this installment to see what is going on at Breeze Hill. The excitement level is just as great and the story keeps getting better!

* I was provided a complimentary copy of this book from the publisher Tyndale House, Inc. on behalf of the author. I was not required to give a favorable review. All opinions are my own.*

BACK COVER BLURB:
1792, Natchez Trace, MS
Bitter since his eldest brother abandoned their family in Ireland, Quinn O’Shea travels to Natchez, Mississippi, ready to shuck the weight of his duty and set off on an adventure of his own. It’s time Connor, as head of the family, took responsibility for their younger siblings. While aboard ship, a run-in with three Irish sisters lands Quinn in the role of reluctant savior. Though it may delay his plans, he cannot abandon the Young sisters, especially the tenacious yet kind Kiera.

Upon arriving in the colonies, Kiera Young prepares to meet her intended and begin her new life. But she soon discovers the marriage her brother-in-law arranged was never meant to be, and a far more sinister deal was negotiated for her and her sisters.

Quinn offers to escort his charges safely to Breeze Hill Plantation and his brother’s care, fully intending to seek his freedom elsewhere. But the longer he remains, the greater his feelings toward Kiera grow and the more he comes to realize true freedom might be found in sacrifice.