THREE WORDS AND A WISH by Sondra Kraak, reviewed by Winnie Thomas

Three Words and a Kiss is a delightful, entertaining story featuring a cast of three-dimensional characters that are endearing and realistic. 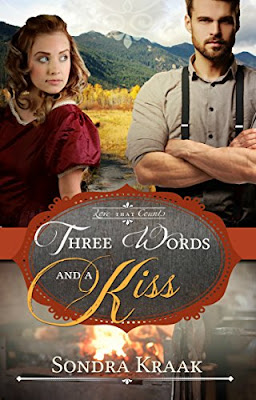 Sondra Kraak is a master at creating settings that are vivid and easy to imagine. I wanted to transport myself to Pine Creek and visit with everyone there. The main characters, Samantha and Cameron were almost polar opposites. Samantha was impulsive, enthusiastic, and compassionate, while Cameron was more reserved and kept his feelings mostly to himself. He quietly helped others around the town. There was more than a little clashing between these two characters, but it caused a lot of hilarity and fun. One of my favorite secondary characters was William the duck. He was a great addition to the book. If you want a light-hearted, charming read with threads of hope and faith running through it, grab this book.


BACK COVER BLURB:When a big-hearted debutante collides with a small-town blacksmith set in his ways, it can mean only one thing—a war of hearts has come to Pine Creek.

Cameron Wallace thrives as both the blacksmith and the minister in his community of Pine Creek. Out of the fires of a chaotic childhood, he’s forged a peaceful life filled with safe relationships and predictable routines. But when the smithy he’s been renting is sold out from under him, the impulsive woman who buys it stokes the embers of emotions he’d rather keep unlit—and even has the audacity to lend a helping hand to his smithy work.

Samantha Klein has never been afraid to push boundaries when it comes to helping those whom society—and God—have overlooked, be they orphans, immigrants, or injured animals. When her latest attempt to aid a group of Chinese women lands her in a newspaper scandal, her high-society family sends her packing from Seattle. Setting out on her own, she purchases the Pine Creek smithy and hatches another plan for helping her immigrant friends. But only weeks after arriving in Pine Creek, her plan turns to ashes, and she’s overwhelmed by needs she can never hope to meet, including her own need to be seen and cared for. And the one who seems to understand her is the man who won't let her anywhere near his heart, no matter the attraction that burns between them.

As Cameron struggles to find a new normal, and Samantha yearns for someone to share her burdens, old hurts and dangerous secrets make them both terrified to admit that what they need—and what God has planned for them—just might be each other.

BUY Three Words and  a Wish at Amazon