MORE THAN MEETS THE EYE by Karen Witemeyer, Reviewed by Trixi Oberembt

"She still had a few tender places that ached when prodded, but Zack and Seth had loved and accepted her into a place where past hurts mattered less than present blessings. Maybe God had brought her into this stranger's life to do the same for him." ~pg. 59 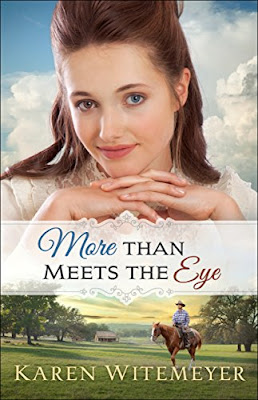 This is one of those stories to bask in for a few days after reading it just to absorb everything about it! After recovering from the heart-wrenching prologue, Witemeyer promises to soften the blow with her trademark humor and she does so beautifully! I think that's always my favorite things after reading a book written by this talented author; her infectious humor and big belly laugh-out-loud moments. You can't go wrong when you pick up one of her stories.
I'm also hoping she has more in this series because the ending was just the beginning for me. Especially for big brother Zack...and that's all I gotta say about that! Evie is a favorite of mine, she doesn't let what people say about her ruin her sense of well-being and upbeat personality. She has a tender heart when it comes to the misfits of the world, even so far as animals go as evidenced by her friendship with Hezekiah the wild pig. Well not so wild maybe because he's treated like one of the family, at least by Evie. What a spoiled rotten but lovable creature who adds his own personality to the mix! Then along comes Logan, as much of a mystery man as can be. He has revenge on his mind and a devious way to enforce it, that is until a wood sprite named Evie traipses into his life and property. He didn't count on getting emotionally attached to her and the way she makes him open up to things he'd rather see stayed buried! These two have opposite views when it comes to things in life and causes a few sparks. They are fun to watch and even more fun to see fall in love. Seth and Zack add to the strong family dynamics. This mixed family has so much to offer a reader; three people whose past circumstances mesh them together by tragedy, heartache and a bond that surpasses all understanding. There's lots to discover in this action-packed adventure, even a little bit of suspense and mystery going on and infused with plenty of faith. You'll laugh, you'll cry, and you'll sigh satisfactorily at the end!

*I received a complimentary copy from Bethany House Publishers on behalf of the author and was under no obligation to leave a favorable review. *