TOGETHER FOREVER by Jody Hedlund, review by Paula Shreckhise

Together Forever is the second book in the Orphan Train Series.

As usual, Jody Hedlund has woven a terrific tale. She capably turns her research into a realistic story that tugs at your heart. She puts you right in the story through the setting and you feel the plight of the poor orphans who were riding a train out West in hopes of finding a family who could love them. 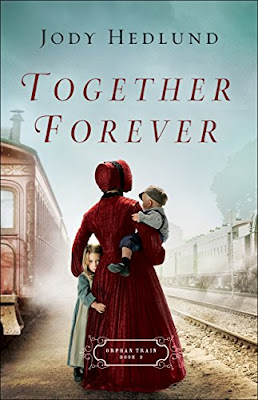 As agents of the Children’s Aid Society, the job of Marianne Neumann and Andrew Brady is to take thirty-one children on a long train journey from New York City to Illinois. Their purpose is to place them out with people who agree to take them. Not only does Marianne desire to find good homes for the orphans. She is looking for her missing sister, Sophie, who she believes has ended up in a town along the train line. Drew is still trying to find his way in the world — out from under the expectations of his father, who wants him to go into the ministry or law. But Drew would rather help children in a different way, much to his father’s disappointment. As they travel together, Drew and Marianne try to fight their growing attraction.

Will Marianne find her sister? How can Drew and Marianne bear to part with the children they have come to love? Will they be able to place all the children and will they be going to good homes?

This was a very interesting subject, showing the logistics of placing orphans in a hopefully stable environment. It also showed the faith struggles that Drew and Marianne went through in the middle of seemingly insurmountable circumstances that could have crippled them.
This book is for fans of historical Christian fiction. It is filled with hope, forgiveness and redemption.

BACK COVER BLURB:
Marianne Neumann has one goal in life: to find her lost younger sister, Sophie. When Marianne takes a job as a placing agent with the Children's Aid Society in 1858 New York, she not only hopes to give children a better life but seeks to discover whether Sophie ended up leaving the city on an orphan train.

Andrew Brady, her fellow agent on her first placing trip, is a former schoolteacher who has an easy way with the children--firm but tender and funny. Underneath his handsome charm, though, seems to linger a grief that won't go away--and a secret from his past that he keeps hidden. As the two team up placing orphans amid small railroad towns in Illinois, they find themselves growing ever closer . . . until a shocking tragedy threatens to upend all their work and change one of their lives forever.

*I received this book from the publisher, Bethany House. I was under no obligation to post a favorable review. All opinions are my own.*