WHERE THE FIRE FALLS by Karen Barnett, review by Rebecca Maney

"So you're at my disposal?" 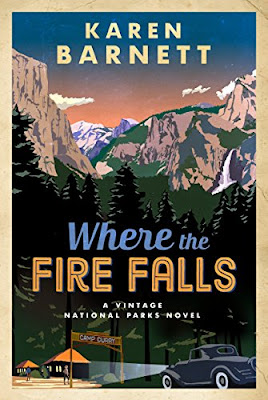 Not exactly what Yosemite National Park guide Clark Johnson was expecting to hear from the raven haired artist, accompanied by her millionaire friends. Sure, he'd been assigned to guide Olivia Rutherford towards the park's splendid displays of natural beauty so that her paintbrush could capture their magnificence, but she is making it sound like he is nothing more than a glorified porter. "First chance he got, he'd be setting this little minx straight."

How could Olivia have let herself be talked into returning to Yosemite? What happened in this park years ago changed the course of her life and the lives of her younger siblings, who are now dependent on her success for their livelihood. Living behind an assumed name and an altered persona might gain her notoriety in the art world, but stepping back into her family history is tricky business, especially when a handsome, rugged mountain guide's simple friendship and discerning gaze dares to chip away at her carefully applied facade. Clark Johnson honestly believes that Yosemite is God's creative masterpiece, and maybe it is.

Enchanting, brimming over with descriptive scenery, and a bit unnerving at times, "Where the Fire Falls" is ultimately a freedom canvas; coloring in the emancipation of two pained individuals from the shame of their pasts; finding that "dis-grace is a human term . . . . . . God invented grace. " And the romance? . . . . . . . always and forever, unless greed finds a way to destroy the scene.

I received a copy of this book from the publisher. The opinions stated are entirely my own.