ON MAGNOLIA LANE by Denise Hunter, Reviewed by Susan Snodgrass

'Sometimes you just have to extend a little grace to people. Not because they deserve it...but because we don't deserve it either.'

Denise Hunter visits her Blue Ridge Romance series again with this third offering and, in my opinion, the best yet. 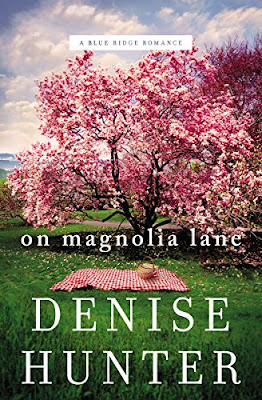 Pastor Jack McReady has been in love with Daisy for a while now, but she's a member of his congregation and he feels that he doesn't deserve her. He's counseled her numerous times but still feels guilty about falling for a parishioner. His friend Noah finds out that Daisy has joined an online dating service and secretly creates a profile for Jack, using his first name so he will remain anonymous.

Daisy runs a small flower shop and is happy with her life. She does want to have a family one day, but feels unworthy of that because of a learning disability. But she finds a friend in 'TJ', the unknown friend on the dating site. She continues to be friends with her pastor, too. Then she is hit broadside with a long buried family secret and turns to Jack for help in his role as her pastor. She is also involved in a huge community project. Then, as they tend to do, secrets become unburied. Will these two allow God to plan their future instead of them knowing how it should go?

I loved this story so much. Pastor Jack was one of the most humble men I've ever known and Daisy is just precious in her personality. The premise here was so much fun to read. I loved it from the first line. "Jack McReady had fallen in love with Daisy in one-hour increments." It only gets better from here. I read this in one day, couldn't stop reading! Denise Hunter at her best. Recommended.

*I received a complimentary copy of this book from Thomas Nelson Publishers through Net Galley. All opinions expressed here are entirely my own.


BackCover Blurb:
From the bestselling author of The Convenient Groom and A December Bride (now beloved Hallmark Original movies) comes the final book in the Blue Ridge Romance series.


Falling in love with Daisy was easy for Jack. But finding the courage to tell her becomes problematic when his secret feelings lead to even bigger complications.

After two years of counseling sessions with Daisy Pendleton, Pastor Jack McReady has earned a permanent spot in her life as a spiritual leader—and nothing more. Jack would never risk losing her trust by exposing the depths of his heart, but he’s hopelessly in love with her.

Daisy loves her southern small-town life and her job at her family-run flower shop, but she doesn’t have the thing she longs for most: someone to share it with. Her recent foray into online dating has been a disaster—until she meets TJ.

Jack could kill his friend Noah for using his initials and some indistinct photos to set up a profile on the dating app Daisy is using. But when he’s finally afforded the opportunity to show her a different side of himself, he’s sucked into the plan before he has time for second thoughts.

Online, Daisy shares some of her greatest fears with TJ, but in person, Jack and Daisy are spending more time together. When a devastating family secret surfaces, Daisy knows that only her trusted friend and counselor can bring her comfort. Jack wants nothing more than to be both men for Daisy, but revealing his secret will prove to be the ultimate test of Daisy’s grace.