ROMANCING THE BRIDE by Melissa Jagears, reviewed by Trixi Oberembt


If it's one thing I can count on with Melissa Jagears, is the tightly packed emotion in her stories! From laugh-out-loud moments, to those more tender ones, to tears flowing, and anywhere in between. This one had it all! 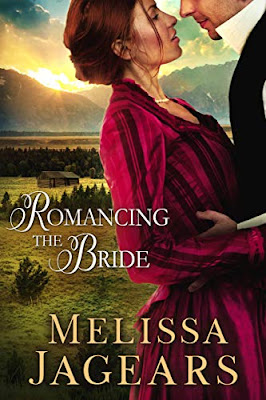 Annie Gephart certainly had her share of past mistakes and plenty of self-condemnation for them. Struggling with trying to raise her two children after the loss of her husband was hard enough without the possibility of losing the only thing tying her to her past. The ranch she loves so much! Her dream could come crashing down if she doesn't take desperate measures to ensure a future. But asking a man to marry her? Now that's quite unconventional! What choice does she have if she wishes to keep her family together and a roof over her head?

Jacob Hendrix, the town marshal, is frustrated by not being able to capture cattle rustlers because he's too busy doing what Mayor McGill wants. Building sidewalks and running mundane errands is not his idea of what it means to keep the peace. When he receives an unexpected marriage proposal from widow Gephart, his dream of owning a ranch would come true. But will a marriage in name only satisfy his longing for more? Taking on two children—one a rebellious, grief stricken teen, and the other an easy-going precarious boy with a penchant for fun—could be a challenge he'd willing face if it meant he'd have a family. Gaining back the ranch just might bring them closer, or tear them apart before it even began!

I felt so many things through this story! I was laughing in one moment, crying the next and had my heart so torn from one scene to the next! These characters get under your skin. I just wanted to hug Anne, take Celia under my wings and erase her grief, wrangle Spencer in some fun, and sidle up to Jacob to boost his confidence. I loved him especially! He's a man's man, but yet has his softer side he shows when it comes to Annie and her children. All those tender looks he shoots her way melted my heart. There were many times I wanted to shout to Annie to stop being so stubborn and let the man into her heart to love!! Ah yes, this is when I know an author does their job, when I get so emotionally tangled in the story and the characters. When it's hard for me to form a review and feel like I don't do it justice, then you as a reader know you're in for a treat with “Romancing the Bride”!

* I received a complimentary copy from the author and was under no obligation to leave a positive review. All opinions are my own. *

Marrying a stranger to save a ranch is one thing; losing the land on their wedding day is another.

Desperate to keep the ranch where three of her children and a husband lie buried, Annie Gephart must marry or sell. Which of the few bachelors in town would consider a surprise proposal to wed a plain widow with a rebellious daughter, a spirited boy, and unpaid taxes—without laughing in her face?

Jacob Hendrix has never fully let go of his ranching dreams despite ending up as a small Wyoming town’s marshal. The job wouldn’t be so bad, except he’s more errand boy than lawman. When Annie proposes marriage without a single coquettish bat of an eyelash, can he commit himself to a woman he hardly knows for a choice piece of property he’d be an idiot to pass up?

But taxes aren’t all that threaten Annie and Jacob’s plans. Cattle rustlers, crumbling friendships, and wayward children make this marriage of convenience anything but. When they lose what they’ve sacrificed everything to save, will the love of a stranger be enough?

Romancing the Bride is the first book in the Frontier Vows Series by award-winning Christian romance author Melissa Jagears. If you like heartwarming marriage-of-convenience stories, you’ll love this sweet romance filled with endearing characters.

Available in paperback and digital Ebook:
Buy Romancing the Bride at Amazon