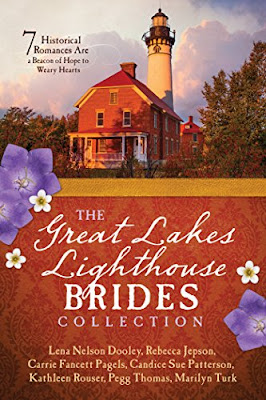 I have always thought lighthouses were interesting and romantic. This might stem from watching Captain January with Shirley Temple when I was a child. This collection has definitely fed my penchant for lighthouse stories. The tales are unique and interesting. I liked the fact that each one was based on a real lighthouse. The writing is very good and captures the eras that each is written about.

Among my favorites are Anna’s Tower by Pegg Thomas, Love’s Beacon by Carrie Fancett Pagels and The Last Memory by Kathleen Rouser.
I recommend this collection to those who want to travel back in time to learn about the history of lighthouses and read some wonderful romances as well.

*I received a complimentary copy of this book from the publisher on behalf of one the authors. I was not required to give a favorable review. All opinions are my own.*

Lighthouses have long been the symbol of salvation, warning sailors away from dangerous rocks and shallow waters.
Along the Great Lakes, America’s inland seas, lighthouses played a vital role in the growth of the nation. They shepherded settlers traveling by water to places that had no roads. These beacons of light required constant tending even in remote and often dangerous places. Brave men and women battled the elements and loneliness to keep the lights shining. Their sacrifice kept goods and immigrants moving. Seven romances set between 1883 and 1911 bring hope to these lonely keepers and love to weary hearts.

Anna’s Tower by Pegg Thomas
1883—Thunder Bay Island Lighthouse
Anna Wilson's plan to be the next lighthouse keeper is endangered when Maksim Ivanov is shipwrecked on Thunder Bay Island. Handsome and capable, he could steal her dream. Or provide a new one.

Beneath a Michigan Moon by Candice Sue Patterson
1885—New Presque Isle Lighthouse
Ava Ryan’s father has passed, leaving her alone, and ill, to tend the light with nowhere else to go. Logging foreman Benjamin Colfax needs the height of the lighthouse to determine the best cutting route, but he senses something amiss in Ava and her determination to remain reclusive. Can he get her to open up, or will she keep herself locked away?

Safe Haven by Rebecca Jepson
1892—Old Mission Point Lighthouse
Rose Miller was found on the lighthouse doorstep as an infant, and now she must hide her quest to find the child who left her there from Captain Nathan Perry, the man she loves to hate.

Love’s Beacon by Carrie Fancett Pagels
1898—Round Island Lighthouse
Valerie Fillman's best hope for a future lies on the tiny island that holds her worst memories. Can Paul Sholtus, the new lightkeeper, and his daughter help bring healing? And love?

The Last Memory by Kathleen Rouser
1899—Mackinac Point Lighthouse
Natalie Brooks loses her past to amnesia, and Cal Waterson, the lighthouse keeper who rescues her, didn’t bargain on risking his heart—when her past might change everything.

The Wrong Survivor by Marilyn Turk
1911—Au Sable Lighthouse
Lydia Palmer's dream for happiness as a lighthouse keeper's wife shatters when her fiancé Nathan Drake drowned in a shipwreck, but his brother Jesse survived.