Stratagem by Robin Caroll is an intriguing story based on a unique premise.
Grayson Thibodeux is a psychologist who creates games. The kind that help companies decide who to hire or promote. The kind that could also get you killed!

Robin Caroll sets her novel in New Orleans and touches on technology as well as on the seedy elements of the city. She delves into the troubling aspects of gambling and what could happen if it controls you. Throw in a Christian protagonist who is wrongly accused of his ex-wife’s death and you have one exciting novel. 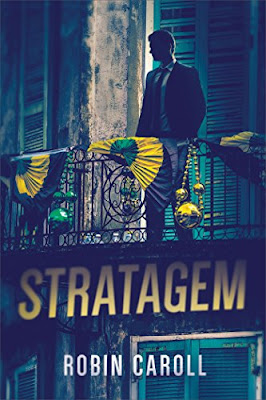 Robin Caroll is a new author to me and I will definitely check out her other books. She writes in a natural and believable way, giving details that move the story along.

Deep in the gritty underbelly of New Orleans, psychologist Grayson Thibodeaux loses everything when his wife leaves him to climb her company’s corporate ladder. He buries himself in his job of creating mind-bending adventure games for businesses as team-building explorations. When his ex-wife’s company hires Grayson’s to create an elaborate game, he doesn’t see how things can get worse. Until she dies during the course of the game he created…making him the prime suspect for murder.