HIDDEN AMONG THE STARS by Melanie Dobson, Reviewed by Rebecca Maney

"It's a tale of two books and their owners, stories that didn't end between the covers."

Trapped inside Austria during the Nazi occupation in 1938, the lives of three families intersect in a most unusual way; the son of a castle owner, the caretaker's daughter, and a lovely violinist born into a Jewish family become life lines one for another. Annika has loved Max all her life, but Max only has eyes for the one whose music flows effortlessly between the strings and the bow. When the unthinkable happens and families are ripped apart, it's the books that will ultimately tell the story. 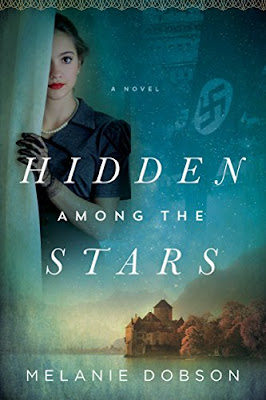 Years pass before Ohio bookshop operator Callie Randall runs across a vintage book, finding pages inscribed with a curious listing of valuables, carefully scripted in such a manner that the items have remained hidden in plain view. When Callie's research surrounding the antique book connects her with a nearby professor, whose own search for answers to the past includes an old picture taken on the grounds of an Austrian castle, the walls that she has so carefully constructed around her heart threaten to crumble.

"You have to relive the pain to tell the stories." Thankfully, "God is infinitely more beautiful and loving and tender and kind than anything we can imagine of Him".

What a lovely tribute to those whose family members became "hidden among the stars".

From the award-winning author of Catching the Wind, which Publishers Weekly called “unforgettable” and a “must-read,” comes another gripping time-slip novel about hidden treasure, a castle, and ordinary people who resisted evil in their own extraordinary way.
The year is 1938, and as Hitler’s troops sweep into Vienna, Austrian Max Dornbach promises to help his Jewish friends hide their most valuable possessions from the Nazis, smuggling them to his family’s summer estate near the picturesque village of Hallstatt. He enlists the help of Annika Knopf, his childhood friend and the caretaker’s daughter, who is eager to help the man she’s loved her entire life. But when Max also brings Luzia Weiss, a young Jewish woman, to hide at the castle, it complicates Annika’s feelings and puts their entire plan—even their very lives—in jeopardy. Especially when the Nazis come to scour the estate and find both Luzia and the treasure gone.

Eighty years later, Callie Randall is mostly content with her quiet life, running a bookstore with her sister and reaching out into the world through her blog. Then she finds a cryptic list in an old edition of Bambi that connects her to Annika’s story . . . and maybe to the long-buried story of a dear friend. As she digs into the past, Callie must risk venturing outside the safe world she’s built for a chance at answers, adventure, and maybe even new love.