Murder of Convenience by Linda Shenton Matchett is set in Philadelphia during WWII.

Mr. Alexander has just told his daughter, Geneva that she is betrothed to Thurgood Mayfield. The trouble is this is not Regency England but America in 1942 and Geneva is of age. Her father is just trying to provide for his daughter because she has a degenerative eye condition that could find her blind. Or is that the real reason he wants Geneva to marry Thurgood? 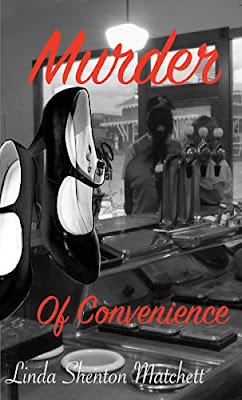 Geneva rejects the plan to marry and forges off on her own to Baltimore to apply for a job with the USO. There she meets Devon, the stage manager, doing what he can for the troops. He tried to enlist but has a medical condition of his own. There, Thurgood comes to take her back home to Philadelphia, but she refuses to go with him, loudly denying they are engaged. Later, when Thurgood is found dead... Geneva is considered a suspect. Together, she and Devon vow to try to find the real killer and clear her name.

Ms. Matchett writes a plucky heroine trying to overcome her infirmity and become her own person. She seeks answers from God through prayer. The hero is thoughtful, supportive and shows his Christian faith.

With an inside look at the USO during WWII, this cozy mystery has a great plot that will keep you guessing until the end.


May 1942: Geneva Alexander flees Philadelphia and joins the USO to escape the engagement her parents have arranged for her, only to wind up as the number one suspect in her betrothed’s murder investigation. Diagnosed with Retinitis Pigmentosa, she must find the real killer before she loses her sight…or is convicted for a crime she didn’t commit.

Set in the early days of America’s entry into WWII and featuring cameo appearances from Hollywood stars, Murder of Convenience is a tribute to individuals who served on the home front, especially those who did so in spite of personal difficulties, reminding us that service always comes as a result of sacrifice. Betrayal, blackmail, and a barrage of unanswered questions… Murder of Convenience is the first in the exciting new “Women of Courage” series.

Available in digital ebook and paperback:
Buy Murder of Convenience at Amazon
Posted by Debra E. Marvin at November 06, 2018