MARK OF THE RAVEN by Morgan L. Busse, reviewed by Rebecca Maney

As heir apparent to the House of Ravenwood, Selene has just been gifted; she's now a dreamwalker, and according to her mother, a surprisingly powerful one. Curious about an ability that the other six regions of her kingdom thought was destroyed, she listens as Grand Lady Ragna describes the seriousness of honing her skills, for she is to be the savior of her people by . . . . . . . . . . controlling the dreams of others to the point of death? It cannot, it must not, be true. 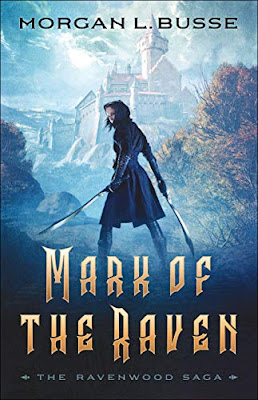 Grand Lord Damien from the House of Waters is convinced that the Seven Houses must unite their gifts in order to avoid an aggressive attack from the nearby Dominia Empire. When called to the House of Ravenwood for a strategy summit, he hopes to build an alliance that will bring peace, maximizing the kind of unity that his deceased father longed to establish. Fascinated by the dark beauty residing in Rook Castle, he cannot help but wonder what kind of strength lies beneath Selene's cold veneer. . . . if he only knew, and yet, he is about to find out.

"A leader can serve her people by sacrifice and love."

"Mark of the Raven" captures the essence of light and darkness within an ingenious package of daunting expectations and ingenious characterizations. . . . . .taking its readers on a journey that leads straight to their souls.

Lady Selene is the heir to the Great House of Ravenwood and the secret family gift of dreamwalking. As a dreamwalker, she can enter a person's dreams and manipulate their greatest fears or desires. For the last hundred years, the Ravenwood women have used their gift of dreaming for hire to gather information or to assassinate.

As she discovers her family's dark secret, Selene is torn between upholding her family's legacy--a legacy that supports her people--or seeking the true reason behind her family's gift.

Her dilemma comes to a head when she is tasked with assassinating the one man who can bring peace to the nations, but who will also bring about the downfall of her own house.

One path holds glory and power, and will solidify her position as Lady of Ravenwood. The other path holds shame and execution. Which will she choose? And is she willing to pay the price for the path chosen?