A PLUM BLOOMS IN WINTER by Linda Thompson, reviewed by Paula Shreckhise

This is an extraordinary novel that deals with very hard subjects.

It is wonderfully written and well worth picking up.

Dave Denham is a pilot, one of Doolittle’s Raiders, who finds himself a Prisoner of War in Japan. 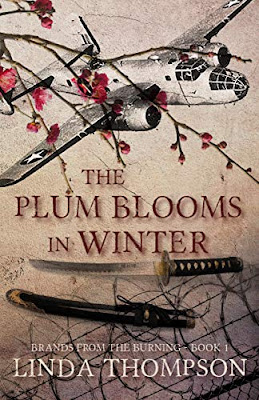 Miyako has lost almost everything to war: her mother, her two brothers and her self-respect. She is forced into prostitution in order to keep her ailing father in medicine and the two of them in food. She keeps that fact from her father as she seeks to avenge the family honor by plotting against the Americans who took her family from her.

Linda Thompson writes with a realism that this kind of information demands. She doesn’t sugarcoat the circumstances that history has shown us. But she tells the tale with compassion. She shows us that sometimes you have to reach rock bottom before you can look up and see Salvation through Christ.

The story is beautifully written. It is wonderful to me that it is based on a true happening, as explained in the afterward. I applaud the author’s decision to bring these people to life in such a poignant way.

If you are looking for fiction based in fact and you want to be challenged and changed, then this is the book for you.

*I received this book from the author. I was not required to post a positive review. All opinions are my own.*

BackCover Blurb:
A Prostitute Seeks Her Revenge--In 1942, Miyako Matsuura cradled her little brother as he died on the sidewalk, a victim of the first U.S. bombing raid on Japan. By 1948, the war has reduced her to a street-hardened prostitute consumed by her shame.

A WWII Hero Finds His True Mission--Dave Delham makes military aviation history piloting a B-25 in the audacious Doolittle Raid. Forced to bail out over occupied China, he and his crew are captured by the Japanese and survive a harrowing P.O.W. ordeal. In 1948, he returns to Japan as a Christian missionary, determined to showcase Christ's forgiveness.

Convinced that Delham was responsible for the bomb that snuffed out her brother's life, Miyako resolves to restore her honor by avenging him--even if it costs her own life. But the huntress soon becomes hunted in Osaka's treacherous underworld. Miyako must outmaneuver a ruthless brothel owner, outwit gangs with competing plans to profit by her, and overcome betrayal by family and friends--only to confront a decision that will change everything.


Buy A Plum Blooms in Winter at Amazon
NetworkedBlogs