SWIMMING IN THE DEEP END by Christina Suzann Nelson, Reviewed by Kim

Swimming in the Deep End by Christina Suzann Nelson is a well written poignant story about four women whose lives intertwine in various ways. I was immediately drawn in to this story and felt varying degrees of empathy for each character. 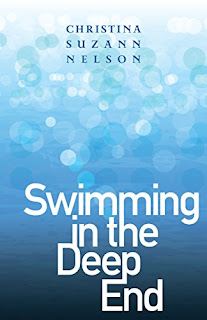 I really had trouble connecting with Jillian. She seemed more concerned about her past and the opinions of others than her family and the situation they unexpectedly found themselves in. She came across as pretty selfish and I just couldn’t like her or her choices.

I really felt for Izzy and what she was going through. It would be hard enough for a mature adult, let alone a teen who didn’t have the best support.

What Stacey and her husband had been through was truly sad. I liked her growth throughout the story, it was very believable and led me to believe that whatever happened
with their situation, she would trust God and be okay.

Margaret’s story is the one I thought I’d like the least, but actually liked the most. She grew tremendously throughout the story and I really liked her relationship with officer Hobbs. He was one of my favorite characters.

Overall, it was a good story, but I did struggle connecting with some of the actions and thought processes by both Izzy and Jillian. They just didn’t seem realistic to me and the ending was tied up a little too neatly for me. I wish I could explain more without going into spoiler territory!

*I was given a complimentary copy of this book. All thoughts are my own.

Available in digital ebook and paperback:
Buy Swimming in the Deep End at Amazon