THE LIBERTY BRIDE by Marylu Tyndall, reviewed by Paula Shreckhise

The Liberty Bride is 6th in the series The Mayflower Brides.

Adventure abounds during this tale of the War of 1812. It is now 1814 and the British are planning to take Washington D.C. and Baltimore. 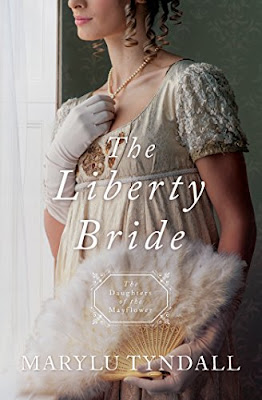 Owen Masters is the son of an apostate preacher and wants nothing to do with a God he perceives as distant and authoritarian. Throughout this book, he encounters people who are genuine Christians and they help him to discover the true God who loves him. While Owen is far from God, he is a staunch patriot even going so far as securing a British commission as a Naval officer in order to spy for America.

Emeline Baratt is returning to her home in Baltimore after several years in England with her wealthy aunt. Her ship is overtaken by the HMS Marauder where she meets Owen. They try to keep their American loyalty from each other and the British ship’s crew as obstacles meet them at every turn. Eventually they band together to try to accomplish their goal of fighting for America’s freedom.

If you want an exciting tale and want to learn a bit of history, this book is for you. Ms. Tyndall has captured the foreboding of the hero and heroine as they seek to spy for their homeland.

*I was given a complimentary ARC of this book by the author. I was not required to give a favorable review. All opinions are my own.*


Lieutenant Owen Masters and Emeline Baratt meet on a British warship as sworn enemies. Where will Emeline place her loyalties when forced to spy against her country?
A brand new series for fans of all things related to history, romance, adventure, faith, and family trees.

War Forces a Choice Between Love and Country
A trip home from England to Maryland in 1812 finds Emeline Baratt a captive on a British warship and forced to declare her allegiance between the British and Americans. Remaining somewhat politically neutral on a ship where her nursing skills are desperately needed is fairly easy—until she starts to have feelings for the first lieutenant who becomes her protector. However, when the captain sends her and Lieutenant Owen Masters on land to spy, she must choose between her love for him and her love for her country.