CHRISTMAS AT THE RED DOOR INN by Liz Johnson, Reviewed by Susan Snodgrass

'Sure the butterflies and kisses are fun. But love means choosing for care for him more than I care about getting my own way.' 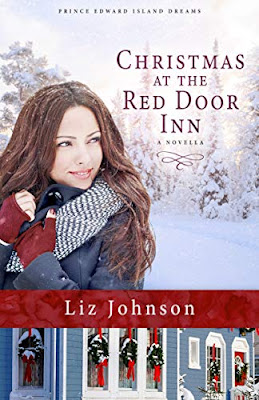 Liz Johnson takes us back to Prince Edward Island with this absolutely delightful and precious novella featuring Brooke Kane and Father Chuck O'Flannagan. Father Chuck is actually not a father because his church is non-denominational, but it everyone persists in calling him that because it was Catholic many years ago. And he is leaving town. He just feels he is not doing any good with the congregation and has been asking God for help for so long, so he is heading back to his native Ireland to take another church.
Brooke Kane is keeping an eye on the Red Door Inn while the owners are out of town when a blizzard strikes and Father Chuck literally plows into the door. They are forced to stay in the inn until the weather clears. Both of them have been harboring feelings for each other for some time, but neither has said anything.
Liz Johnson has just outdone herself in this little short novella! I was captivated from the first page. It is incredibly precious and totally delightful. I know I said that already, but it was so sweet and fun to read. I enjoyed every single minute. Don't miss another trip back to PEI.

*I purchased this book and was under no obligation to review it, nor provide a positive review.

Lifelong islander Brooke Kane doesn’t know what to do with her college degree, her dreams, or her future, but she knows better than to venture far from home when there’s a storm brewing. But a promise to check on Rose’s Red Door Inn prompts Brooke to venture out. By the time she arrives at the inn, the snow is knee-deep and visibility almost non-existent. She settles in to spend a few days alone at the inn until a familiar figure appears at the door.

Pastor Chuck O’Flannigan has never felt like a bigger fool. So focused on his recent decision to leave Prince Edward Island, he’s caught unaware by the blizzard while on a walk. He can only see the inn’s red door, a promise of safety. But when he discovers that Brooke—the only woman who could tempt him to stay on the island—is also taking refuge there, he knows he’s in trouble.

With Christmas only three days away, Brooke is determined that they’ll celebrate—even if it’s just the two of them. Happy to play Scrooge to her Tiny Tim, Chuck wiles away his hours dreaming of a return to Ireland—praying that God may have plans for him there. After all, God seems to have forgotten him in North Rustico. But as Brooke brings Christmas to life, her joy makes him wonder if God may not have forgotten him. In fact, God may have big plans for both of them—if they can only survive Christmas at the Red Door Inn.

Available as ebook only:
Buy Christmas at the Red Door Inn at Amazon