First off, I must confess that I have a few other books by Nancy Mehl sitting on my shelf unread. It's not due to lack of interest, but a case of way too many books and way too little reading time! I've often fantasized I could clone myself just to get more reading in! That being said, I wished I wouldn't have waited this long to discover her writing because this book was beyond my expectations! I've read a LOT of suspense in a LOT of various topics and subjects written in this genre, however, the combination of thriller/psychological angle added an extra layer that had me hooked from the start. It's just like the title conveys, a definite mind game for both the reader and Kaely Quinn. Step into her world and it's as if you've stepped into a whole other dimension where the game of cat and mouse has dangerous and fatal consequences! 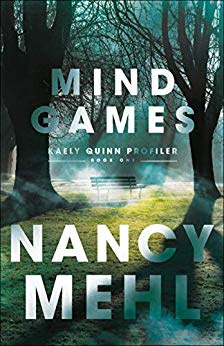 Kaely's character was excellently portrayed; she's smart as a whip, excels in her job as an FBI behavioral analyst, and has a natural knack for reading people. She's what I would call a slayer of human monsters; those who kill without remorse or thought for life. The killer who has a personal vendetta against her wants to trip her up, make her doubt her abilities and mete out revenge for some unknown crime committed against him. She's desperately racing against time to save not only herself but those who are victims in a sick and twisted poem the killer writes just for her. With the help of special agent Noah Hunter as lead, can they stop this reign of terror and bring the psycho to justice before its too late?

Like I said, this exceeded my expectations! I had an inkling of who might be behind it all about halfway through, but not until the very end did I find out if I was correct or not. Mehl throws in a lot of twists and turns to throw off the reader. The only thing I was a little disappointed in, there wasn't a lot of romance in the story. It was hinted at, and subtly under the surface, but it never fully developed. I love romantic suspense and watching the hero and heroine falling in love in the midst of danger. In spite of this, it didn't deter my enjoyment of the story. And I get to look forward to the second book where we revisit both Kaely and Noah, so there's hope for romance yet! A definite page turner and a thrilling mind game all through the pages, I honestly couldn't put this down. She hooked me from the start and never let up on the tension throughout. I really love an author who can stump you and keep you guessing until the very end.

*I received a complimentary copy from Bethany House and was under no obligation to leave a positive review. All opinions are my own. *

BackCover Blurb:
Kaely Quinn's talents as an FBI behavior analyst are impossible to ignore, no matter how unorthodox her methods. But when a reporter outs her as the daughter of an infamous serial killer, she's demoted to field agent and transferred to St. Louis.