THE FAITHFUL SPY: DIETRICH BONHOFFER AND THE PLOT TO KILL HITLER by John Hendrix, Reviewed by Rebecca Maney

" . .. Dietrich could no long imagine theology and faith as mere ideas. They were convictions that demanded action." 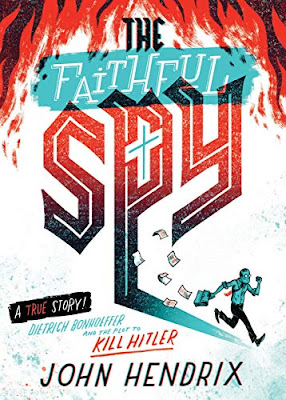 Having never read a graphic novel before, it was hard to imagine the impact that intentional words surrounded by artistic illustration could create. This particular novel not only brought a faithful Christian patriot to life, but its thoughtful display painted a distinct contrast between the diabolical ideals that Hitler chose to dictate and the eternal truths of Scripture that Bonhoeffer lived and died to emulate.
What a wonderful way to place history on the page.

*I bought this novel and was under no obligation to review it.

BackCover Blurb:
Adolf Hitler’s Nazi party is gaining strength and becoming more menacing every day. Dietrich Bonhoeffer, a pastor upset by the complacency of the German church toward the suffering around it, forms a breakaway church to speak out against the established political and religious authorities. When the Nazis outlaw the church, he escapes as a fugitive. Struggling to reconcile his faith and the teachings of the Bible with the Nazi Party’s evil agenda, Bonhoeffer decides that Hitler must be stopped by any means possible!

In his signature style of interwoven handwritten text and art, John Hendrix tells the true story of Dietrich Bonhoeffer, a pastor who makes the ultimate sacrifice in order to free the German people from oppression during World War II.

Available in paperback, hardcover and digital ebook:
Buy The Faithful Spy at Amazon