THE SONGS OF YOU AND ME by Mylissa Demeyere, Reviewed by Winnie Thomas

Mylissa Demeyere’s debut novel is a captivating story that is sure to set your heart aflutter. With realistic and endearing characters that come alive on the page, a gripping story line, and powerful themes of overcoming fear, forgiveness, and the power of love, this story captured my attention and wouldn’t let go until the last page. 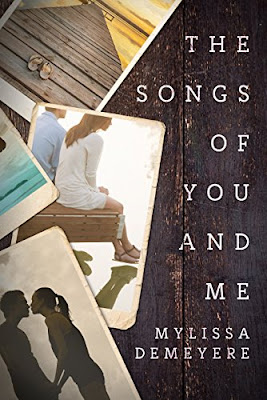 I enjoyed seeing the songs that Demeyere chose to go with the chapters. It was a fun addition to the book. I also liked the way she wove the past history of Jackson and Jane in with the present during the story, as it added an extra dimension to see how their relationship developed.

I will be looking for future books by this author. I would recommend this book to those who enjoy clean, wholesome stories.


BackCover Blurb:
A SECOND CHANCE AT FIRST LOVE.
Jane Hartford fell head over heels for Jackson at the tender age of fifteen. She spent most of high school pining for him, until she realized he wasn't going to see her as anything more than his baby sister's best friend. Now she finds herself single with a daughter, a broken heart, and songs that remind her of a long lost love.

Jackson Wright is a man living with regret. His biggest one, never acting on his feelings for Jane. When he returns to Bellebrook, the town they grew up in, he literally runs into her and his world gets tossed upside down and sideways.

This time, Jackson isn't willing to give up. With a meddling sister eager to push both of them together, he believes things might actually work out. That is, if they can overcome the heavy baggage they both carry. Follow Jackson and Jane as they revisit their past, figuring out what went wrong so long ago.

Will they learn they have the power to make things right in the present?

Available in paperback and digital ebook:
Buy The Songs of You and Me at Amazon