FLIGHTS OF FANCY by Jen Turano, Reviewed by Paula Shreckhise

Flights of Fancy is another wonderful, witty tale by Jen Turano.

It is 1885. Join American Heiress, Isadora Delafield, as she takes her Flight of Fancy to escape the clutches of a most unsuitable suitor. She flees from New York Society to a remote farm in Pennsylvania. There she encounters a successful man of business, Ian MacKenzie, his Aunt Birdie and eccentric Uncle Amos and four endearing orphans. She tries to pass herself off as a housekeeper with hilarious results. While learning a completely different way of life, she finds satisfaction in serving others. 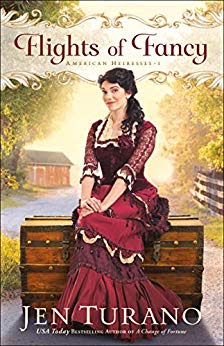 Ms. Turano takes her characters through circumstances that help them realize that sometimes wealth isn’t everything. I can always count on her for some fun along the way with antics by the characters- be they human or animal. This story has Buttercup, the cow, who likes to visit in the kitchen or the parlor and the pet attack hen named Elmer! Along with the signature comedy there is a mystery to solve and villains to dissuade.

I recommend this book for those who want a lighthearted yet inspirational, historical read.

Miss Isadora Delafield may be an heiress, but her life is far from carefree. When her mother begins pressuring her to marry an elderly and uncouth duke, she escapes from the high society world she's always known and finds herself to be an unlikely candidate for a housekeeper position in rural Pennsylvania.

Mr. Ian MacKenzie is known for his savvy business sense and has built his reputation and fortune completely on his own merits. But when his adopted parents are in need of a new housekeeper and Isadora is thrown into his path, he's unexpectedly charmed by her unconventional manner.

Neither Isadora nor Ian expected to find the other so intriguing, but when mysterious incidents on the farm and the truth of Isadora's secret threaten those they love, they'll have to set aside everything they thought they wanted for a chance at happy-ever-after.