One of the best suspense novels I have read this year!

This is such an interesting premise: A profiler who is the target of a serial killer. It will definitely keep you on your toes. Nancy Mehl is truly playing “Mind Games” with the reader. It made me sit back and say “WOW”! 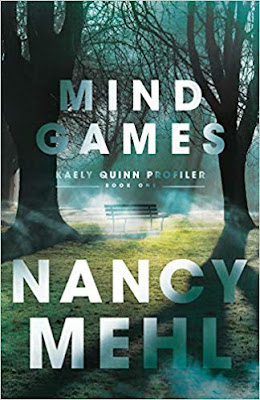 I wanted to read this book about Kaely Quinn because it takes place in St. Louis, where I lived for twenty years. This is familiar territory for me but the story is completely unique! The twists and turns of the case make it a real page turner. Excellent research makes this novel feel very authentic. And the writing style is so effortless, it puts you right there with Kaely every step of the way.

The faith thread is the “bones” of the story because Kaely truly relies on God through all the difficulties. Yet Ms. Mehl portrays her as a flawed person who is functioning well at her job as an FBI profiler.

The supporting characters were very well-drawn and pique my interest into what is in store for the next book. Without being a cliff-hanger, you know there is much more in store for Kaely Quinn.

If suspense is your go-to genre you won’t want to miss this intriguing book by Nancy Mehl.

*I was given a complimentary copy of this book by the publisher on behalf of the author. I was not required to give a favorable review. All opinions are my own.*

Kaely Quinn's talents as an FBI behavior analyst are impossible to ignore, no matter how unorthodox her methods. But when a reporter outs her as the daughter of an infamous serial killer, she's demoted to field agent and transferred to St. Louis.