WITH THIS PLEDGE by Tamera Alexander, Reviewed by Susan Snodgrass

'Sometimes life on this side of the veil is far more difficult than I think it should be. But then, God promises to not eliminate suffering.' 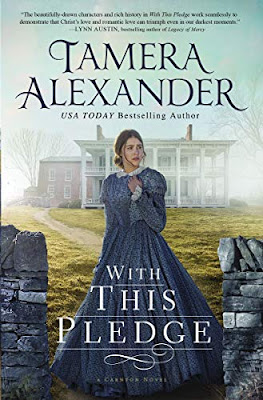 Every so often you read a book, that when you finish, you can't even bear to pick up another to read. I stayed up late to finish this powerful story and then the characters populated my dreams and held my mind captive for a long time. This is such a book.
November 30, 1864. Franklin, Tennessee. The Civil War is raging. Elizabeth 'Lizzie' Clouston is a governess for the McGavocks at their home, Carnton. The battle of Franklin begins that day and rages for 8 hours and kills nearly 10,000 men. Carnton is immediately turned into a field hospital, so full of men undergoing surgery that they spill onto the lawn and beyond. The battlefield is clearly visible from Carnton's windows and it is vicious. So vicious that one soldier said, 'It was as if the devil had full possession of the earth.' An actual soldier of the battle said this.
Lizzie is pressed into service as assistant to the doctor and surgeon, administering chloroform as he operates and tending to the wounded and dying. Her heart is breaking at the atrocities she sees. One soldier, Captain Roland Jones, insists she stand up for him while he is under anesthesia and not let the doctor amputate his leg, even if it means he'll never have use of it again.
Lizzie hates slavery, even though she lives in the south and works for a slave owner. Roland is himself a slave owner. She is convinced that the south will lose and she hopes for this to happen so that all men may be free. But Lizzie is not vocal about her feelings and this begins to bother her greatly.
This book is based on historical fact. There was a real battle of Franklin, as there is still a real Carnton plantation. Almost every character in her story was an actual person. Tamera Alexander's research is impeccable and she makes this dreadful time come alive for her readers. I studied the Civil War in school and have read numerous books that dealt with the subject or set in the time period, but she completely brought it home fully to me. The Battle of Franklin has been called the bloodiest battle of the Civil War. Numerous Confederate generals met their death in this battle and it was said that a person could walk across the battlefield and not touch the ground because there were so many dead. As a history lover, this book was eye opening to me. It also made me reach out and do some research of my own.
Alexander's descriptions are so vivid, the reader feels as if they are transported back in time, standing right there in the middle of the scene where life and death hangs in the balance for these wounded soldiers. I felt as if I were in those rooms at Carnton where the blood was spattered along the walls, men lay dying and begging for relief. Our hearts hurt as they cry out for someone to let their loved ones know what happened to them. This actually happened! This part is not fiction. The feelings that Alexander conveys are so visceral that the reader gasps at the savagery of it all. I wept through many passages. And all through the book, her spiritual theme shines through. Tamera Alexander manages to include her readers in everything she writes; not just this book, but her others as well. There is such a depth to her writing that it's no wonder I carried these characters with me long after finishing the book. And that they invaded my dreams. This was one of the most powerful and outstanding books I've ever read. I highly recommend this. Not to be missed!
*I received a complimentary copy of this book from Thomas Nelson Publishers through Net Galley. Opinions expressed in this review are entirely my own.

What can a woman--a mere governess--do against the scourge of slavery?
Elizabeth "Lizzie" Clouston's quietly held principles oppose those of the Southern Cause--but when forty thousand soldiers converge on the fields of Franklin, Tennessee, the war demands an answer. The Carnton home, where she is governess, is converted into a Confederate hospital, and Lizzie is called upon to assist the military doctor with surgeries that determine life or death. Faced with the unimaginable, she must summon fortitude, even as she fears for the life of Towny, her fiancé and lifelong friend.
As a young soldier lies dying in Lizzie's arms, she vows to relay his final words to his mother, but knows little more than the boy's first name. That same night, decorated Mississippi sharpshooter Captain Roland Ward Jones extracts a different promise from Lizzie: that she intervene should the surgeon decide to amputate his leg.
Lizzie is nothing if not a woman of her word, earning the soldiers' respect as she tends to the wounded within Carnton's walls. None is more admiring than Captain Jones, who doesn't realize she is pledged to another. But as Lizzie's heart softens toward the Confederate captain, she discovers his moral ground is at odds with her own. Now torn between love, principles, and pledges made, she struggles to be true to her own heart while standing for what she knows is right--no matter the cost.
From the pages of history and the personal accounts of those who endured the Battle of Franklin, Tamera Alexander weaves the real-life love letters between Captain Roland Ward Jones and Miss Elizabeth Clouston into a story of unlikely romance first kindled amid the shadows of war.
Available in digital ebook, paperback, hardcover and audiobook:
Buy With This Pledge at Amazon
Buy With This Pledge at Christianbook.com
Posted by Debra E. Marvin at January 18, 2019