THE NUMBER OF LOVE by Roseanna M. White, Reviewed by Winnie Thomas and Rebecca Maney 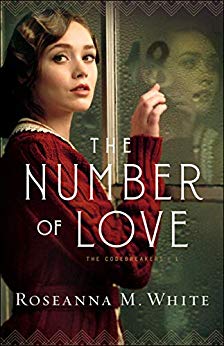 Winnie's Review:
I’ve been wanting to read Margot De Wilde’s story since I met her in Roseanna White’s previous series. She is such an unusual heroine with a unique way of looking at, and coping with, the world. Her intelligence and wit shines in The Number of Love, and Drake Elton is the perfect counterpoint to her character. He sees something deep inside her and is willing to work to understand her world. White is a master at creating fascinating and colorful characters, and this story has plenty of them, including several cameo appearances of people from her Shadows Over England series. It was such fun to see them pop up here and there.

With a setting in London during World War I, this tale is replete with rich historical detail and fascinating information about the intelligence network during the war. The author’s research shines through and adds such deep interest to the story, while the inspirational themes of faith, hope, courage, and the power of love lend depth and satisfaction. I would recommend this book to those who love well-written historical romantic fiction with large doses of suspense and intrigue thrown in.


Rebecca's Review:
"The numbers marched across the page in a glory all their own."

Margot De Wilde stays quite busy using her prodigious mathematical prowess to aid England's intelligence network at its highest level; in short, Margot is a codebreaker. She would rather calculate the number of bricks used to construct a building, than bat her eyes in flirtation; thus keeping her male counterparts in Room 40 at a comfortable distance. That is until one day, when Lieutenant Drake Elton barged into her private conversation of numbers and popped just the right question, "Have you a name?"

Drake Elton cannot forget the girl without a name, whose dark eyes pervade his memory through-out the hours of his dangerous days and nights. When his own service as an intelligence agent is interrupted by a life threatening injury, Drake returns home to England to recuperate and discovers the enigmatic Margot De Wilde once again; this time at the side of his hospital bed, in the shadow of his beloved sister. Unfortunately, all is not fair in love and war as pundits would have us to believe, for there are some puzzles that seem impossible to solve, or perhaps it's just a matter of asking the right question.

Outstanding hardly seems adequate to describe the manner in which Roseanna White has brought these characters to life!


INKWELL REVIEWER REBECCA MANEY is offering a special gift to celebrate her love of Roseanna's series.  She's offering a paperback of A SONG UNHEARD where we first meet the heroine of THE NUMBER OF LOVE.