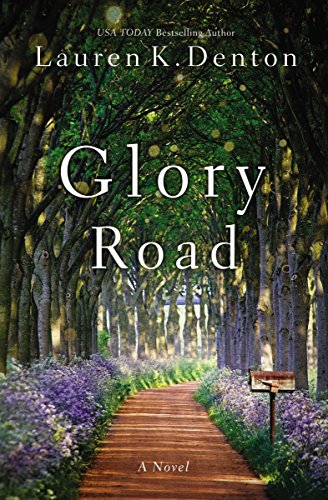 A lovely sentiment perhaps,"but maybe our repair skills didn't extend to the brokenness that existed between the two of us". Is Jessie McBride truly convinced that the past is the past, and that some things can never be restored? She is so used to her quiet, familiar life on Glory Road; where she, her teen daughter, and her mother live protectively nestled just steps away from her popular local garden shop. Just takes the rumble of a familiar engine loosens the strings of predictability; perhaps forever or perhaps, never.

Such great characters invade this beautifully written story that bravely heralds the many seasons of life, love, and inevitable loss. A blossoming teen, an aging parent, a surprising suitor, and one who feels like coming home, all blend with a gentle authenticity that will paste its readers into life along the hot, dusty roads of southern Alabama; I loved the feel, I loved the fit, I loved the flow . . . between what could have been, what might have been, what should have been, and what might never have been . . . . except for one extra trip down Glory Road.

*I received a copy of this book from the publisher. The opinions stated are entirely my own.

BackCover Blurb:
As three generations of women navigate the uncertain paths of their hearts and futures, one summer promises to bring change—whether they’re ready for it or not.

At thirty-eight, garden shop owner Jessie McBride thinks her chances for romance are years behind her and, after her failed marriage, she’s fine with that. She lives contentedly with her fiery mother and her quiet, headstrong daughter. But the unexpected arrival of two men on Glory Road make her question if she’s really happy with the status quo. Handsome, wealthy Sumner Tate asks her to arrange flowers for his daughter’s wedding, and Jessie finds herself drawn to his continued attention. And Ben Bradley, her lingering what-could-have-been from high school days who’s known her better than anyone and whom she hasn’t seen in years, moves back to the red dirt road. Jessie finds her heart being pulled in directions she never expected.

Meanwhile, Jessie’s fourteen-year-old daughter, Evan, is approaching the start of high school and trying to navigate a new world of identity and emotions—particularly as they relate to the cute new guy who’s moved in just down the road. At the same time, Jessie’s mother, Gus, increasingly finds herself forgetful and faces a potentially frightening future.

In one summer, everything will change. But for these three strong Southern women, the roots they’ve planted on Glory Road will give life to the adventures waiting just around the curve.