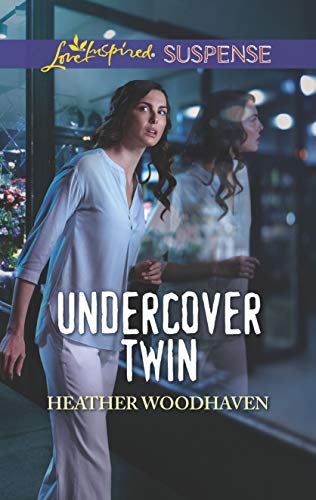 Undercover Twin is book one of a two book offering by Heather Woodlawn. They are published by Love Inspired.

Running a bit late, Audrey Clark arrives at a symposium. Suddenly, she is passed a large envelope. Case of mistaken identity? It all becomes clear when, after a man is shot, she comes face to face with the twin she didn’t know existed! When her twin is also wounded, the only thing possible is to assume her twin’s identity and go undercover with her partner in the FBI.

This was a fast paced, exciting read. When they get out of one scrape, it seems Audrey and Lee get into another. Who is after them and can they complete their mission. And what about those feelings Lee is having toward Audrey that he never had toward her sister Kendra? The action scenes were well described. I especially like the hot air balloon sequence. The author has obviously been up in a balloon. The faith thread was subtle but realistically portrayed.

This is the first book about the twins. Next book, we get to see what transpires with Kendra.

I recommend this book for fans of Love Inspired Suspense.

Audrey Clark never knew she was a twin—until she stumbled onto a covert operation. Now with her FBI agent sister shot and in critical condition, going undercover with Agent Lee Benson is the only way to protect her newfound twin. And as her pretend husband, Lee must keep Audrey safe…or pay twice the deadly price.

*I received a complimentary copy of this book from the author. I was not obligated to give a favorable review. All opinions are my own.* 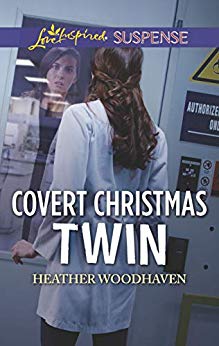 Covert Christmas Twin is the companion book in Twins Separated at Birth by Heather Woodhaven in the Love Inspired line.

If you like FBI operatives running from bad guys, this is well worth the reading.

Audrey’s story was in Undercover Twin and now we get to see what trouble Kendra, the real FBI agent, is getting into as she takes her sister’s place in a research lab, and pretend to like all things Christmas. Is she successful in making people think she is Audrey? Explosive action and being trapped in an abandoned building add to the excitement. Joe Rose, FBI agent and Kendra are trying to find and take down a mastermind. The trouble is they don’t know if they can trust anybody but eachother.

Great follow up to Undercover Twin. Do the sisters finally get to reunite? And lookout for Mr. and Mrs. Clause... who is using the disguise?

BackCover Blurb:
To save her sister, she’ll need to become her

After discovering she’s a twin, FBI special agent Kendra Parker tracks down her birth mother—and faces a barrage of bullets. Now armed with the knowledge that her mother’s a spy, Kendra must go undercover as her sister to protect her family. But can she and FBI analyst Joe Rose expose a government mole…before they all end up dead?