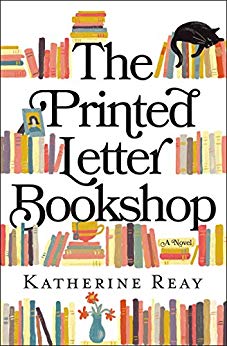 "It felt sad, as if the shop itself had just realized that what lay ahead could never be better than what lay behind."

Or could it? It certainly seems out of the realm of possibility. When Madeline Cullen's world is upended by a crushing disappointment in one career, she is subsequently thrust down a vocational path that she never wanted; how could the death of an aunt whom she would have loved to deem beloved, seem so painfully ironic?

The Printed Letter Bookshop is an iconic landmark and gathering space in the small
Winsome community; its two remaining employees suddenly heartbroken and downtrodden about the certain possibility that the shop will be sold after the death of its owner. Their own lives have become like pages in the books that surround them, constantly turning, hoping for a happy ending. They could never have imagined that their real life stories would end up being the best chapters of all.

Synergy comes to mind as an appropriate descriptive of this quite lovely and thought provoking story; three women whom most would incorrectly assume had nothing in common, managing to forge friendships around the things they did have in common; life's messy details.

"You hem me in, behind and before, and lay your hand upon me."

*I purchased this book with no obligation to review, nor provide a positive review.


Books. Love. Friendship. Second chances. All can be found at the Printed Letter Bookshop in the small, charming town of Winsome.
One of Madeline Cullen’s happiest childhood memories is of working with her Aunt Maddie in the quaint and cozy Printed Letter Bookshop. But by the time Madeline inherits the shop nearly twenty years later, family troubles and her own bitter losses have hardened Madeline’s heart toward her once-treasured aunt—and the now struggling bookshop left in her care.
While Madeline intends to sell the shop as quickly as possible, the Printed Letter’s two employees have other ideas. Reeling from a recent divorce, Janet finds sanctuary within the books and within the decadent window displays she creates. Claire, though quieter than the acerbic Janet, feels equally drawn to the daily rhythms of the shop and its loyal clientele, finding a renewed purpose within its walls.
When Madeline’s professional life falls apart, and a handsome gardener upends all her preconceived notions, she questions her plans and her heart. Has she been too quick to dismiss her aunt’s beloved shop? And even if she has, the women’s best combined efforts may be too little, too late.


This sweet, contemporary read is a standalone novel, though characters in this story will appear in Katherine Reay’s forthcoming book, Of Literature and Lattes.
Available in digital ebook, paperback, library binding and audiobook:
Buy at Amazon
Buy at Christianbook.com