A DISTANCE TOO GRAND by Regina Scott, Reviewed by Paula and Winnie 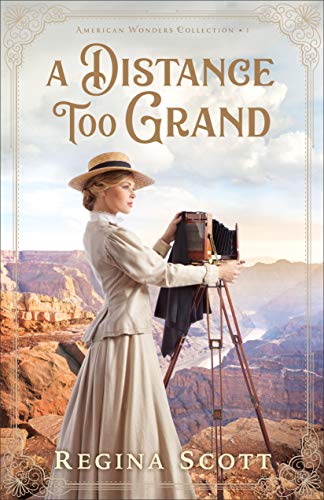 PAULA'S REVIEW:
A Distance Too Grand is the first in the new American Wonder Collection by Regina Scott.

Regina Scott captures the stark beauty of the Grand Canyon with her eloquent prose. The story takes you back in time to 1871 when expeditions were trying to find a way West through the Canyon. The perilous trip was so interesting as were the descriptions of early photography. The small band of explorers met several obstacles which were presented in an authentic way.

Captain Ben Coleridge is leading the group into unknown territory to take samples and chart the territory for a possible road and crossing point. Meg Pero is along to photograph the beauty and grandeur of the iconic landscape. She is fulfilling her deceased father’s contract with the Army to document the trip.

Meg and Ben have a shared history from their time at West Point, where her father took portraits of the cadets. It is now five years later and they have both changed. Meg is a feisty woman, determined to make her mark as a photographer in her own right. She is no shrinking violet debutante. Yet she seeks to please society’s matrons. Ben counsels her: “There’s only One who matters, Meg. And He forgives our mistakes freely. All we have to do is do our best. It doesn’t matter what anyone else thinks.”

This book is adventurous and compelling. It is more than pretty scenery. It is a solidly written historical story with romance and some mystery.
I give this book 5 stars.
*A copy of this book was provided by Revell Publishers through Interviews and Reviews. I was not required to give a favorable review. All opinions are my own.*

WINNIE'S REVIEW:
The striking cover and the setting drew my interest in this historical fiction novel by Regina Scott. The Grand Canyon is truly awe-inspiring, and Scott captured the beauty, vastness, and danger of it well. The characters are well-drawn and engaging. I enjoyed Meg’s spunk and independence and Ben’s leadership and protectiveness of his team. Dot and Hank were favorites of mine, and their obvious love for each other was evident throughout the story.

I learned much about the photography process in 1871, the flora and fauna of the Grand Canyon area, and Army life during that time. The history aspect was interesting, and Scott’s descriptions painted a beautiful picture of the area. There were a few parts where I felt the story dragged a bit, and parts where I felt it could have benefitted from deeper plot points, but on the whole it was a satisfying read. 3.5 stars rounded to 4
*I voluntarily reviewed a complimentary copy from Revell through Interviews and Reviews. All opinions are my own.

BackCover Blurb:
Meg Pero has been assisting her photographer father since she was big enough to carry his equipment, so when he dies she is determined to take over his profession--starting with fulfilling the contract he signed to serve on an Army survey of the North Rim of the Grand Canyon in 1871. What she doesn't realize is that the leader of the expedition is none other than the man she once refused to marry.

Captain Ben Coleridge would like nothing more than to leave without the woman who broke his heart, but he refuses to wait even one more day to get started. This survey is a screen for another, more personal mission, one he cannot share with any member of his team.

As dangers arise from all sides, including within the survey party, Meg and Ben must work together to stay alive, fulfill their duties, and, just maybe, rekindle a love that neither had completely left behind.