BRAND OF LIGHT by Ronie Kendig, Reviewed by Kim 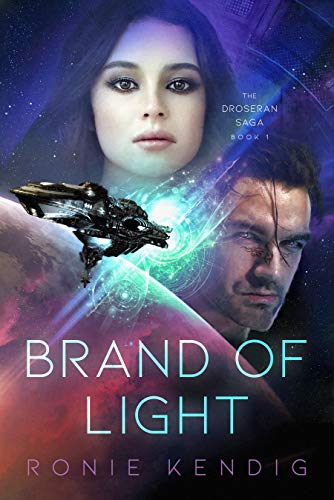 Brand of Light by Ronie Kendig is BRILLIANT! The worldbuilding, the characters, the storyline, the pacing, it is EPIC!! I was sucked in from chapter one and I barely put the book down. And when the story ended? I may have shouted “Nooooo!” I was not ready for it to be over and I really need book 2, right now! I’m not sure that I have ever wanted to read a sequel as badly as I want to read this one! I am dying to see what happens next!

I loved so many things about this story, but I’ll keep this review about my two favorite characters, mainly because of spoilers. Marco...you really just can’t help but love everything about him! He’s a bounty hunter who has a heightened sense of smell, so much so that he can smell emotions, like fear or happiness. And, boy oh boy does this set us up for some really...intense situations, especially with Kersei! Speaking of Kersei, she is fierce, tough, immensely likable and perfect for Marco. Some of the things she goes through will just break your heart. I really want to say so much more, but I can’t or I will definitely head into spoiler territory.

Do yourself a favor and pick up this story! It is beautifully written, impossible to put down, and you will be sucked into this incredible world of which you will not want to leave!
*I received a complimentary copy and I purchased 2 copies of this book!

BackCover Blurb:
There's a price on her head, and it has everything to do with the brand on her arm.

Tertian Space Coalition has blessed every planet in the quadrants with high technology, save one: Drosero. But in spite of their tenuous treaty with the ruling clans, TSC has plans for the backward planet. And they're not alone.

After a catastrophic explosion, Kersei Dragoumis awakens in a derelict shuttle, alone, injured, and ignorant of the forbidden technology that has swept her into a nightmare. The brand she's borne since childhood burns mysteriously, but the pain is nothing to that when she learns her family is dead and she is accused of their murders.

Across the quadrants, Marco Dusan responds to the call of a holy order—not to join them, but to seek a bounty. Gifted—or cursed—with abilities that mark him a Kynigos, a tracker sworn to bring interplanetary fugitives to justice, Marco discovers this particular bounty has nothing to do with justice and everything to do with prophecy. One that involves the hunter as much as the hunted.