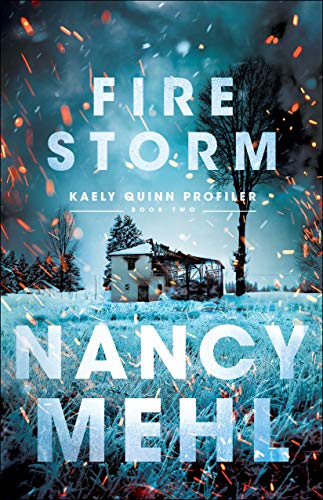 Fire Storm by Nancy Mehl is the second book in the Kaely Quinn, Profiler series. I would say you could read it as a stand-alone, but you will learn a lot about Kaely in the first story, which will help you to understand her character a bit better. More on Kaely in a minute!

First, what I liked about this story. Ms. Mehl has a writing style that draws you in and makes you want to read the story. I liked the suspense in the book. The entire time I was reading, I was trying to figure out who the villain was. I also like Noah and many of the other secondary characters in this story.

Now for a few issues I had. Kaely is a very different character from any other character that I’ve read. She does some things that are very questionable and honestly make me uncomfortable. I don’t want to get into spoiler territory, but I wonder if a real FBI profiler used her tactics, what would happen to them. I also felt like she was very uncaring with her sick mother. She went to Dark Water to take care of her and relieve her brother from doing all the caregiving, but she ended up caring more about a case, which was not even hers, than her mother. I also wished the relationship between Kaely and Noah and Kaely and her mom would have moved farther along. That being said, I am looking forward to book 3, Dead End, which comes out in March.

*I received a complimentary copy of this book from Netgalley. All opinions are my own.

BackCover Blurb:
When FBI profiler Kaely Quinn's mother is diagnosed with cancer, Kaely takes time off work to go to Dark Water, Nebraska, to help her brother care for their mother. Upon her arrival, she learns of a series of fires in the small town, attributed by the fire chief to misuse of space heaters in the frigid winter. But Kaely is skeptical, and a search for a pattern in the locations of the fires bolsters her suspicions.

After yet another blaze devastates a local family, Kaely is certain a serial arsonist is on the loose. Calling upon her partner from St. Louis, Noah Hunter, and her brother's firefighter neighbor who backs Kaely's suspicions, Kaely and her team begin an investigation that swiftly leads them down a twisted path. When the truth is finally revealed, Kaely finds herself confronting a madman who is determined his last heinous act will be her death.